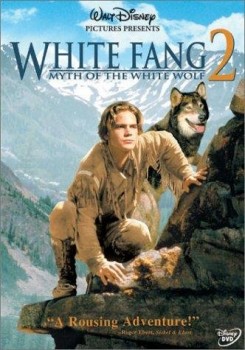 White Fang 2: The Legend of the White Wolf

White Fang II - The Legend of the White Wolf is an adventure story set in Alaska in the early 1900's. Henry Casey leaves his played out gold mine for a trip to San Francisco, accompanied by his white wolf, White Fang. An incident along the way prompts an old Indian Chief, Moses Joseph, head of a small starving Indian tribe, to ask for Henry's aid in finding and bringing back the caribou. Through a series of circumstantial occurrences, the chief believes Henry to be a mystical "White Wolf", a shape changer with magic powers, who could kill the evil "Devil Snake" who had taken many of their braves. Henry finally agrees to try , and with the help of the chief's daughter, Lily, he and White Fang discover what's really behind the trouble that has been plaguing the Indian village. There are both simple and intense animal action scenes throughout this picture. White Fang, was played on screen by several dogs. Although some scenes take place in the dwellings of Henry and the Indians, most of the action takes place outdoors.