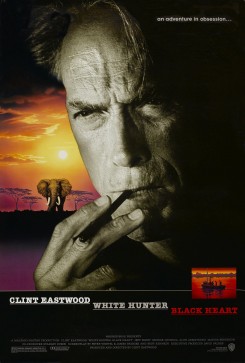 Based on the making of the film, The African Queen, White Hunter, Black Heart tells the story of a cruel film director, John Wilson. John has one way of doing things, his way. John is anxious to get to the African location of his next film early so that he can go on a hunting safari. He's obsessed with killing one of the bull elephants that have tusks down to the ground. The story follows John to Africa with his friend Peter, a screenwriter who has the sensitivity John lacks. John is not without redeeming qualities; he amusingly silences a pompous anti-Semite and when he fights a British film producer who insulted a black waiter, John gets creamed. As they fly over the Congo, various species of wild animals such as zebra, elephant and elk can be seen. John forms a close relationship with a native tribesman whose judgement he trusts. In the meantime, John and Peter's friendship is strained because of John's obsession with killing an elephant. Peter considers the killing of "one of the miracles of God's creation" a crime. John responds that it's not a crime, it's a sin and that's why he wants to kill one. The remark exposes the way this man thinks. The film itself delivers a strong anti-hunting message.

All Africa animal action was filmed on national reserves in Zimbabwe. John greets his film's stars while cradling a monkey in his arms. He later lets the monkey run all over the dinner table. Animal trophies seen on walls, etc. in various scenes were borrowed or rented from a variety of sources in Zimbabwe. A "freshly killed Reed Buck" served on a large platter at a formal dinner was actually a road kill that the film company had frozen until they were ready to film the scene. The elephant that attacks while protecting its young was trained by Randall J. Moore, an active African conservationist, according to the film's executive producer.