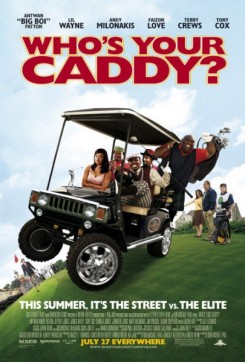 A popular rapper, C-Note (Big Boi), applies for membership at a conservative country club and is turned down. When he moves into a house overlooking the club’s golf course, the club’s president and board members reconsider his application.

The film was sped up for some scenes depicting polo matches to make it appear as if the horses are moving faster than they really were. Trained polo ponies and riders from a professional polo club contributed their skills, with trainers and stuntmen doubling as actors whenever necessary. The American Humane Certified Animal Safety Representative checked the grounds ahead of time to make sure the environment was safe for the animals.

Big Large (Faizon Love) falls off a horse during a match. For this scene, a stuntman filled in as the rider and threw himself  off the side of his horse. The horse continued to run to trainers on horseback and on foot waiting just off-screen. The other horses and riders in the scene kept pursuing the ball and rode away from the stuntman on the ground.

Richard (Jeffrey Jones) and C-Note (Big Boi) are riding so close that their horses knock into each other, causing C-Note to fly over the back of Richard’s horse and onto the ground. This scene was filmed in separate sequences. In the first sequence, one horse cantered across camera while a second one entered in the same line. In a second shot, another horse and rider cantered in and rubbed against a horse’s backside. Finally, a stuntman stood on a platform while another stuntman dressed as the actor sat on a horse nearby. The first stuntman jumped over the rump of the horse to a mat below on the ground. A riderless horse was released and ran off-screen to an awaiting trainer. The film was sped up and these pieces were put together in post-production.

A horse is fed some marijuana from a plastic bag in a few scenes. To film this, a trainer held the horse’s lead from off-camera. The actor was given a bag with a mixture of alfalfa hay and molasses in it, and the horse ate happily and very comfortably during the scene.

As two cars speed down a road alongside a fenced-in pasture of horses, one horse rears up. This horse was cued by an off-screen trainer to rear up. The cars were kept at a safe distance from the corral.

American Humane did not monitor all of the horse action, including two polo match scenes in which horses and riders fall down.