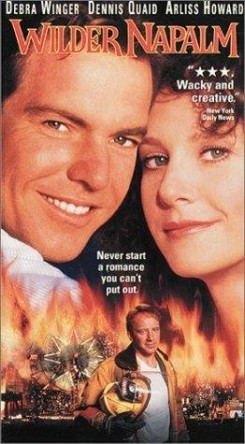 Wilder Napalm is a wildly wacky farce about two brothers who are in love with the same woman. Vida and Wilder live in wedded bliss in a Florida trailer park. Vida is a sexy dish who is under house arrest for arson. She has three days left before she is a free woman again. Wilder works in a small photo booth which sits in the middle of a shopping center parking lot. He's also a part-time fireman. One morning a carnival troop arrives and begins setting up in the lot around the photo booth. The carnival's star attraction is Wallace, a clown who can start fires using his mental powers. Wallace is Wilder's brother, who also loved Vida. The brothers have not seen each other since Wallace burned off Wilder's hair at his bachelor party five years ago. Wilder has been forced to wear a toupee ever since. In a flashback to their childhood we learn that both brothers possess the same incendiary power, but Wilder refuses to use his power. There's been a sibling rivalry between the two brothers all their lives, and when Wallace re-kindles his old flame with Vida, the fireworks really begin. It culminates in a pyrotechnic duel between the pair.

Animals seen in Wilder Napalm are those connected with the carnival, such as a snake, elephants, and a performing Chihuahua. A firehouse Dalmation is also seen briefly in minor action. The carnival snake lady is seen at various times, always with a large snake draped around her neck and shoulders. The snake, a Burmese Python, by the name of Monty Python, was always placed on the actress' shoulder by the trainer before each take and removed afterward. Both actress and python were permitted sufficient preparation time, prior to filming, to become accustomed to one another. When an elephant pushed at the photo booth in the parking lot, the elephant was responding to verbal commands by the trainer. The pyrotechnic grand finale was filmed in many cuts and the elephants were never close to any actual fire. In one scene, as Vida is walking through town, a small Chihuahua, wearing a clown hat, follows slightly behind her. To accomplish this scene two trainers were used. One trainer, hidden behind a building and holding the Chihuahua, released the dog as Vida walked by. Although the dog appeared to be following Vida, he was actually walking towards the second trainer, also out of camera range.