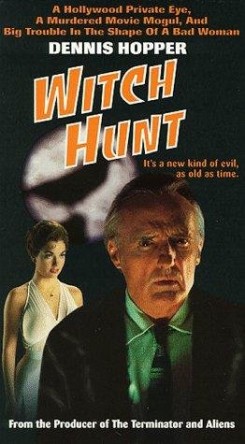 Witch Hunt is a fantasy detective thriller set in Hollywood during the 1950's when magic is most popular, not only as a means of attaining success and pleasure, but also as a method for murder. Detective H. Phillip Lovecraft is hired by an actress to identify the current mistress of her husband, N.J. Gottlieb, a powerful motion picture studio boss. However, when Gottlieb is found murdered by magic, Lovecraft has quite a different case on his hands. Congressional blowhard, Larson Crockett, sets his political and publicity sights on a personal quest to rid Hollywood of magic, which he preaches against as degenerate and corrupt. This subplot is a biting satire of the McCarthy Era "witch hunts" which sought to root out communism and shattered many careers in Hollywood during the 1950's. He crosses paths with Lovecraft when he seeks to accuse Lovecraft's friend, Hypolita Kropotkin, of the Gottlieb murder. Hypolita is a practicing witch, but one who believes in benevolent spells. Her misfortune was to have been associated with Gottlieb. Crockett wants to literally burn her at the stake during one of his televised rallies. With the help of another wicked detective and warlock, Finn Macha, Lovecraft is able to expose Crockett as a practitioner of magic himself and the one who was actually responsible for Gottlieb's murder.

Animal action consists of a snake, a crow, two dogs, a salamander and a toad. The snake is seen several times in the film. We first see the snake when it slithers through a seemingly bottomless puddle that Finn Macha has materialized to demonstrate to Lovecraft that he is a magician. Later the snake is seen being held in the beak of the crow as the bird sits on the hood of Lovecraft's car in the aspect of an omen. The final appearance of the snake in the film is when it slithers through the wig of a mannequin. The mannequin turned up as the remains of what was a real body in yet another murder by magic. For the slithering scenes, the real snake was placed by the trainer and it went from point A to B through first the water and later through the wig. A fake snake was used when you see it in the beak of the bird. There are several scenes where the crow appears, such as sitting on the hood of a parked car where it appears as an omen to Lovecraft and later perched on a mailbox. For these scenes, the trainer positioned the bird and used a lightweight nylon tether to keep the animal in place. When the bird appears to move his head back and forth, it is responding to the verbal and visual commands given by its trainer. For the protection of the bird when it is seen holding the fake snake in its beak, the snake was made large enough so that the bird would not inadvertently swallow it. There is a scene towards the end of the film, where the crow looks as if it is flying out of Lovecraft's mouth. This scene was shot in cuts using a blue screen visual technique. First the bird was filmed against a blue screen flying A to B. For this the trainer had given the bird visual and verbal commands and rewarded it with food. The shot was later edited into a scene where Lovecraft opens his mouth to scream making it appear as if the bird is flying out of his mouth. The dogs, two Doberman pinchers, appear in the scenes in Gottlieb's office before and after he is murdered. The murder by magic actually makes Gottlieb shrink down to about six inches tall and then be fatally attacked by his own dogs. The dogs, who have been sitting in the office snarling as Gottlieb shrinks, are aware that something is amiss and go to investigate the empty clothes that have fallen beneath the desk and now envelope the six inch man. We see the dogs sniff the clothes and then growl and play a tug of war with the pants. In the scenes immediately following, we learn that Gottlieb was killed by the attack dogs, who are led away in muzzles by a policeman. For this sequence of scenes, the dogs were positioned by their trainers who gave them verbal and visual commands to get them to snarl and move A to B. The dogs were then rewarded with food. To get the dogs to attack Gottlieb's pants, bait was placed inside the clothes and the dogs were really going for the food. Later in the film, we see a dog appear in a room at a beach house snarling at Lovecraft. For this scene, the dog was positioned by the trainer and given verbal and visual commands to growl. The dog was then rewarded with food. In a scene where Finn Macha and Lovecraft reveal that they are aware that Senator Crockett is a practitioner of witchcraft, a salamander appears on the Senator's lapel as an omen. Crockett then brushes it off and steps on it as a statement of contempt for their accusation. This scene was shot in cuts. The trainer placed the salamander on the lapel and as the camera started filming, the actor gently brushed it off. The trainer who was just out of camera range caught the salamander in a cloth. When Crockett crushes the animal with his foot, a fake salamander was used. Towards the end of the film, when Crockett truly reveals his evil nature, he throws up a toad while speaking to a crowd from a podium. This scene was shot in cuts. As the toad is being coughed up by the actor, we see it emerging out of his mouth and dropping onto the podium. For this shot a fake rubber toad was used. When we then see the toad hop around on the podium, it was a real toad.