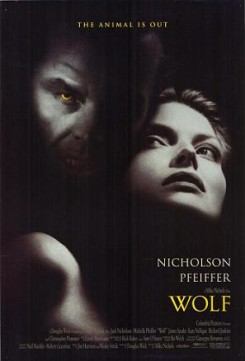 Publisher Will Randall becomes a werewolf and has to fight to keep his job.

The opening scene in which the wolf is hit by Will's car was filmed in a series of fast cuts. No actual contact is seen between the car and the wolf. The wolf is just seen very briefly in the car's headlights. The next shot is of the wolf lying on his side in the road in front of the car. There is a close-up of the wolf's head with his tongue hanging out. Will begins to pull the wolf to the side of the road. The next cut comes very fast, as a snarling wolf attacks Will. Then the wolf runs off into the snowy woods. As Will gets back into his car to drive off, two wolves watch. Then there is a close-up of a wolf's face and eyes. For this scene, real wolves, fake and mechanical wolves were used. The scene where the wolf is first spotted in the car's headlights, was actually shot inside a studio on a sound stage. The wolf was positioned by his trainer to stand on a mark and look at one of the trainers. It was a fake wolf that was hit. When you see the wolf lying in the road, it was the real wolf who had been trained to do a "lay down." The close up of the face of the wolf with the tongue hanging out was that of the mechanical wolf. It was both the real and the fake wolf that was pulled to the side of the road. When the wolf snarls and attacks, the wolf was responding to trainers saying "teeth". The wolf was also filmed jumping over the camera. The camera was positioned low and a trainer held a food reward behind the camera as another trainer released the wolf. For the brief attack, the trainer doubled for the actor. The trainer held a bone that the wolf snapped at and tried to bite. When the wolf runs away, the wolf was actually running from one trainer to another. The first trainer released the wolf as the second trainer called to it. The several wolves that are seen looking at Will as he drives away were mechanical wolves. The horses that react to Will on the lawn of Alden's estate were being guided by three wranglers who were dressed as grooms. The wranglers guided the horses to walk backwards and gave one the cue to rear, which the horse had been trained to do. As Will becomes more and more wolf-like, he develops an appetite for raw meat. In one scene he pursues a deer. He chases it for a while and eventually catches it by jumping from a rock onto the deer below. He wrestles with it, picks it up and breaks it's neck. He then bites into the deer's neck. This scene was accomplished with the use of several real deer, a taxidermied deer and a mechanical deer. For the case with the real deer, six deer were used. A deer was placed in position by one trainer at point A. At the appropriate time, the first trainer released the deer from point A and the deer ran to a second trainer at point B. The deer responded to a buzzer with food as a reward. This was done with a variety of background and filmed from different angles. When Will jumps onto the deer from the rock, a taxidermied deer was used. When Will wrestles, bites and kills the deer, a mechanical deer was used. The real deer and actors or stunt men were never in contact with one another. They were filmed separately. All of this action had been observed by a hawk in the film. The hawk had been placed and held on a tree branch by his trainer and then called with a whistle. Birds are also seen flying into the night sky. These were not real birds, but electronically created by special effects. A scene with a lion, bears and chimps in a zoo was actually filmed in the Central Park Zoo in New York City. In the exciting climax of the film, Laura locks Will in one of the horse stalls of the barn for his own safety. Stewart, who is also becoming a wolf, finds Will and a fight ensues, which includes Laura, Will and Stewart. The horses in their stalls react to all of this with restlessness and occasional rearing. To get the horses to appear agitated, a variety of methods were used. In all instances, trainers were in the stalls out of camera range. They were making noises, using cueing whips, and giving verbal commands. Trained rearing horses were used. Pigeons also fly about inside the barn and near the roof of the barn during this fight scene. To get the effect of the birds flying about the roof, a trainer opened a crate of pigeons at one side of the barn and the pigeons flew to another trainer who had an open crate containing food. This same technique was used to get birds to fly to and from different positions. American Humane was on the set throughout and was aided in some New York filmimg locations by the A.S.P.C.A.