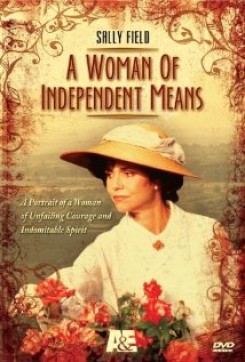 Woman of Independent Means, A

This story, based on Elizabeth Forsythe Hailey's novel, was a six-hour mini series for NBC Television. It begins in 1899 Texas as fourth-grader Bess Forsythe reads a note to her husband-to-be about how she's gotten them into the spelling bee together! The remainder of the series is a demonstration of how she arranges peoples' lives to suit her.

Inheriting money from her mother, she marries her fiancee and they pass through the Great War. After fathering three children, and building a life insurance company, he dies of influenza.

Bess has a falling out with her mother-in-law. Her own family consists of her father who occasionally drops in. While she is obsessively involved with her children, romances loom, grief visits, eras pass and she marries a wealthy man.

Bess suffers and triumphs, as she pushes and cajoles. The story waltzes through the 20's Depression, World War II and the subsequent years in a series of scenes of Christmas and Valentine's Day, taking in all of the foibles of that era that involve families and their children.

Horses pulling buggies and background shots of cattle and sheep grazing in the field behind the plantation are seen throughout.