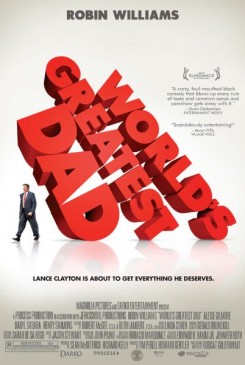 After he finds his son Kyle (Daryl Sabara) dead from a very embarrassing accident, Lance (Robin Williams) tries to protect his son’s reputation from shame by writing a fake suicide note, which ultimately backfires and causes more problems.

Lance’s (Robin Williams) neighbor has a small dog that appears in a couple of scenes. The first time Lance is invited into the neighbor’s house, the  dog sits on the floor near Lance and stares at him while he and his neighbor eat brownies. Later, as Lance walks down the school hallway, he sees the same dog sitting on the floor wearing a school sweater. The cast and crew were introduced to the dog before filming began so all would be comfortable. These two scenes were filmed separately but the animal action was achieved in the same way in both scenes. A trainer placed the dog on its mark and stood just off-camera, cuing the dog to stay using hand signals. The sweater that the dog wears was specially made to fit the dog comfortably, In another scene of mild dog action, Andrew (Evan Martin) holds the dog as he watches television with Lance and the neighbor. The trainer handed the dog to the actor right before filming began and the then stood just off-camera.