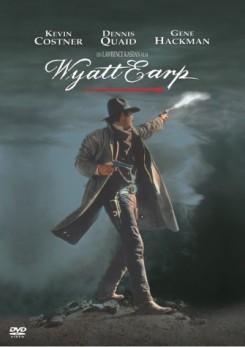 Wyatt Earp is a Western which spans the last 40 years of the 19th century. All the anticipated action is there, but the film also explores in depth, the life and times of Wyatt Earp and the events that made him a heroic legend. The film opens just as the infamous shoot-out with the Clanton gang, known as the gunfight at the "OK Corral, begins. The scene then flashes back to an Iowan farm in 1863 when Wyatt was just fifteen. Wyatt's brothers Virgil and James have just returned from the Civil War where James was badly wounded. Wyatt is eager to leave home and join the fight against "The Rebs", but Wyatt's father, Nicholas, who is a lawyer, has other plans for his family. He wants to move all of them to California where he and his sons can practice law and where he envisions great opportunities for his large family. When several of the younger Earps resist the move, because they have other plans, Nicholas Earp proclaims that the family must stick together as "Nothing counts as much as blood. The rest are strangers". The family travels west and Wyatt grows to adulthood, an intelligent and basically peaceful man, yet courageous and skilled with a gun and his fists. He can't forget Urilla, a girl he met six years before in Missouri and he returns to court her. They fall deeply in love and marry. Wyatt works as a constable while studying law and life is perfect until Urilla, who is pregnant, contracts typhoid fever and dies. In his grief, a drunken Wyatt sets fire to his home and heads west again on his horse. Still emotionally troubled and self destructive, he wanders about and engages in a variety of activities from horse thief (for which he is jailed) to buffalo hunter. After he rids a town of a viscous troublemaker, he is made a deputy. Back on the side of the law, he eventually becomes Sheriff of Dodge City but when he is criticized of for being too tough, the Mayor fires him. He is replaced by Ed Masterson, brother of Bat. He next takes a job with the Santa Fe Railroad, going after train robbers. It is during this time that he meets Doc Holiday and they become loyal friends. Always restless, Wyatt talks with his brothers about going to Tombstone where there are business opportunities and where they could all get rich. He eventually makes his move to Tombstone and his rendezvous with destiny at the OK Corral.

Primary animal action involves horses, which are present throughout the film. In action scenes, trained stunt horses were used. Horses are also ridden or pull wagons or are merely atmosphere. As the Earp family travels west across the prairie, horses and mules pull their wagons. As they arrive in Omaha, a gunfight breaks out in a crowded street. Many shots are fired and a horse is shot by some stray gunfire. The horse lies on his side on the ground with blood oozing from his wound. He raises his head up as people crowd around him. A shot rings out which supposedly is a shot putting the horse out of his misery. The horse used in this scene was a trained falling horse and the ground was prepared to make it soft for his fall. On cue, the horse laid down and fake blood was applied to him. The horse had also been trained to lie on his side. The horse is not seen when the fatal bullet is fired. Quarter loads were used in the gun battle and the horse's ears were protected with cotton. The wagon train continues on its journey and encounters a dust storm. Cattle, horses and mules can be seen. The dust storm was created with the use of a wind machine and some Fuller's earth, which is "movie dust." This creates the effect of blowing sand and dirt. Much of the blowing was between the camera and the actors and the animals, creating the effect of a much more severe storm. The animals were moving very slowly and were rested frequently. The scene then shifts to a canyon road a few years later where several highwaymen on horseback are chasing a freight wagon containing valuable cargo. Gunfire is exchanged between the two factions. A young Wyatt is the driver of the freight wagon. He instructs his partner to shoot the lead horse of the pursuing highwaymen. The lead horse is shot and does a spectacular fall. To achieve this scene, the ground over which they would be traveling was prepared and cleared of any obstacles for the fast riding. The riding horses were walked through the filming area and the wagon horses were driven down the route, so they would be familiar with it. The area where the horse was to fall was dug up and sand was put down to softened the fall. The trained horse fell on cue and, in addition to the ground being softened, a rubber stirrup was used so that when the horse fell on it, it would not hurt him. One eighth loads were used for the gunfire and cotton also was placed in the horses' ears to soften the sound. Part of the scene was shot without the sound of any gunfire and that gunfire was added in post production. There is a scene where a herd of buffalo run across a Kansas plain and through a stream. For this scene, off-camera wranglers rounded up the buffalo and herded them in the basic direction they wanted them to move. Later, Wyatt shoots at the buffalo and several fall to the ground. This scene was filmed in cuts and the three buffalo that fell were were played by one mechanical buffalo. You never see the entire buffalo on screen because there were electrical tables attached to the underside which controlled the buffalo's movements. Camera angles and editing accomplished the rest of the illusion. In another scene, several dead buffalo are lying on the ground as one of the dead buffalo is skinned. It's a graphic and gory sight. All the dead buffalo was plastic fakes, with gel and fake blood added to make a gruesome effect. The piles of buffalo hides which are seen in the background were real, but they were obtained from a source that raises buffalo for food. In a scene that takes place near a stockyard, many cattle can be seen in the background crowded into pens. Extra wranglers were available to care for the cattle who were all inspected and were in good condition. They were all healthy and were fed, watered and cared for appropriately. For a scene in which a group of rowdy men ride into town firing their guns into the air, quarter loads were used for the gunfire. In another similar scene, where horses were around gunfire, quarter loads were used and additional wranglers were placed strategically as an added precaution. In one scene Doc slaps a horse's rump as he pursues a McLeary on horseback. The slap of the horse's rump was enhanced by sound in post production. In a scene which is a prelude to the Gunfight at the OK Corral, two horses rear as the gunfire starts, and one of the horses does a second rear. Trained rearing horses performed this stunt. They responded to cues, not to the sound of gunfire, as quarter loads were used. For the major gunfight scene, quarter loads were used and the sound of gunfire was augmented in post production. The horses' ears were also protected with cotton to soften the sound. Extra wranglers were placed in key positions to catch the horses as they moved out of camera range.. A posse of twenty plus men on horseback ride fast in pursuit of Wyatt and Doc who are now fugitives from the law. For scenes of fast riding, the ground was inspected in advance and any hazards or obstacles were carefully removed. Wyatt and Doc are ambushed in a canyon amid a hail of gunfire. Again, quarter loads were used, and cotton was placed in the horses' ears as an added protection. Extra wranglers were again placed in key positions for any horses that moved out of camera range. Air guns were used to create the illusion of gunfire hitting the ground. The air gun merely shot air at designated spots causing the dust to fly.