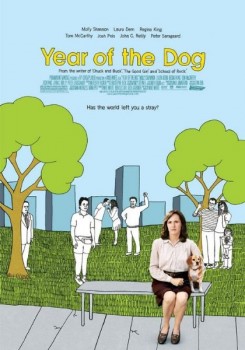 Year of the Dog

Peggy (Molly Shannon) is a wonderful secretary, great friend and sister. Her best friend and companion is her beloved dog, Pencil. But when Pencil dies, Peggy’s world is turned upside down and she begins a hilarious journey of personal transformation.

Throughout the movie, Pencil, Peggy’s beloved dog, is seen sitting and sleeping with Peggy, as well as eating and waiting for her to return home from work. Two beagles, Prada and CK, alternated in the role of Pencil. The trainer placed the dog on its mark and used a combination of hand and verbal signals to achieve all the actions. The cast and crew were introduced to the animals and instructed on handling them before filming began.

The film opens with several dogs playing in a dog park. The trainers doubled as extras for this scene and the mostly leashed dogs were all introduced to each other before filming began. A combination of verbal cues and hand signals were used to achieve some of the mild dog actions seen. In a later scene at the dog park, a dog named Valentine chases a woman and her small dog. A trainer stood in for the actress and Valentine was cued to run to the trainer and “speak” when the trainer picked up the small dog. The two dogs were acquainted with each other and comfortable with the action.

Peggy drives with Pencil in her lap. The trainer  lay in the backseat and verbally cued the dog to look straight, put its paws up and “kiss” the actress. The vehicle remained stationary on a moving trailer.

Pencil wakes up Peggy so he can go outside. He sniffs around the lawn and then runs through a bush. This scene was filmed in separate shots. The dog was placed on its mark at the foot of the bed and given a verbal cue to lie down and stay. The dog was then cued to scratch and look at the actress. Later, the trainer placed the dog on the floor and released it to run to the actress waiting at the open door. A trainer outside called the dog to run through the door and into the yard. The trainer then placed the dog on its mark in the yard and verbally cued the dog to dig and then exit the yard.

Peggy finds Pencil lying in the neighbor’s yard and rushes him to the veterinarian. This scene was filmed in separate shots. The trainer placed the dog on its side near the garage and verbally cued the dog to put its head down. The dog was trained to “flop” over when picked up by the actress. The dog was then placed on its back in the passenger seat and verbally cued to “lie down” and “stay.” The trainer stayed in the backseat to comfort the dog as needed. The vehicle remained stationary.

Peggy meets Valentine and other dogs at Newt’s (Peter Sarsgaard) house. Several trainers were on set for this scene coaching the dogs to perform natural behavior in the backyard. Valentine was played by a German shepherd named Radar. The trainer stayed behind the camera and verbally cued Radar to “speak,” “jump,” and “sit.” All the dogs were rewarded with treats at the end of the take.

Later, Peggy is walking Valentine and he pulls her into a neighbor’s yard. The trainer handed the actress the leash just before filming began and called to the dog from off camera. The dog was prepared for the action and the actress’ reaction made it appear that she was being pulled by the dog.

Peggy loads Valentine into a truck. One trainer placed the dog on its mark while a second trainer hid in the back of the truck and verbally cued the dog to bark and jump into the truck.

Valentine barks and bites Peggy’s hand while eating in the kitchen. The trainer placed the dog on its mark in front of the food bowl and verbally cued it to bark. Before filming began, the dog was trained to bite a towel, and did so when cued. Creative camera angles and the actress’ expression gave the appearance that she had actually been bitten.

A dog urinates on Layla (Regina King) as it sits on her lap in a parked car. Layla tosses the dog into the backseat of the car. The dog was handed to the actress right before filming began. When cued, the actress lifted the dog over to a trainer hiding in the backseat.

Peggy goes to an animal shelter and sees a dog being pulled from a kennel to be euthanized. Peggy rescues this dog and several others. This scene took place in a real shelter. The shelter animals were temporarily removed from the kennels and the kennels were disinfected so 12 actor animals could be brought in for the scene. The trainer verbally cued the dog being pulled from the kennel to “stay” and “back up” while the actor pretended to drag the dog. The dog was trained for the action before filming began.

Peggy drives with dogs in the car barking, and hanging out the windows and sunroof. The dogs were loaded into the vehicle just before filming began. All windows and the sunroof were opened. Three trainers were at the starting mark and two trainers were at the end mark. The trainers cued the dogs to “speak” when the vehicle moved. The trainer stood in for the actress and traffic was controlled by police officers for the 50 yards the car was driven. When Peggy arrives home with the dogs, she leads some of them into the house. The trainers placed the dogs in the vehicle and cued them to “stay” and “speak” as the actress led two leashed dogs into the house. The trainer verbally cued the other dogs to exit through the open window and go to an awaiting trainer.

Dogs destroy Peggy’s living room and bedroom and run wildly through the backyard. Several trainers waited just offscreen and cued the dogs with a combination of laser pointers, clickers, toys and verbal cues to help create the chaotic look of the scenes. Some items were baited with treats to encourage the dogs to pull and grab the furniture and set pieces. The dogs were introduced to each other and comfortable with each other. The yard was an enclosed area. All dogs were rested and given water regularly. Takes were limited at the suggestion of American Humane’s Certified Animal Safety Representative, due to the high energy level of the scenes.

A dog with an envelope in its mouth is picked up by its owner. The trainer placed the envelope in the dog’s mouth and hid just before the actor picked him up. A second trainer off camera called the dog to come and used treats to reward the dog for the action.

There is a small dog named Buttons that walks with the help of a doggie wheelchair in the film. The wheelchair was a prop. The dog was trained to “scoot” along in the chair and was comfortable with the action.

The animals seen at the adoption fair were all familiar with each other and placed on their marks by trainers. The trainers also doubled as actors to assist with the animals. The grounds and cages were checked for hazards before filming began.

The scene at Paradise Farms took place at an actual ranch and the animals were merely filmed in their natural environment.

A studio truck was modified with built-in cages to serve as the chicken truck Peggy sees on the freeway. The chickens were spritzed with water in order to be kept cool throughout the scene, and they were comfortable in their well-ventilated enclosures. The truck provided ample shade. Trainers and the Safety Rep followed closely behind the truck and checked the chickens at the end of each take. Highway patrol held traffic for the scene.