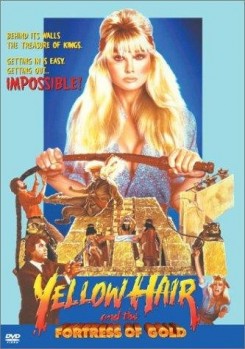 Yellow Hair and the Fortress of Gold

Fiery blonde half-breed Yellow Hair and her easygoing sidekick the Pecos Kid are after a fortune in Mayan gold. The courageous duo have run-ins with an army of Mexican soldiers, a gang of dastardly bandits, and a lethal tribe of Aztec warriors while searching the countryside for said gold fortune.

Although Yellowhair and the Fortress of Gold was filmed in Spain, the story takes place on the Mexican border, where a greedy Army Colonel hires a band of thugs to search for a cave filled with gold. Flores, the head of the gang, knows that the secret of the cave is written on a deer horn that is in the possession of the Apache Indians.

Within the first few minutes of the film, five horses are tripped into traumatic falls by wires hidden by a low trench. One horse actually tumbled down a rocky incline while the rider jumped safely off to the side.

This blatant animal mistreatment garnered Yellow Hair and the Fortress of Gold an Unacceptable rating. AHA also urged a boycott of the film and subsequently received a strong letter from the producers' attorneys asking AHA to stop the boycott and letter campaign and denying any animal abuse on the set. AHA responded in a letter welcoming evidence disproving the horse-tripping, but received no reply.