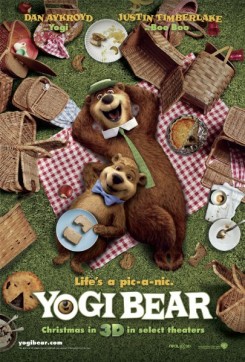 A documentary filmmaker travels to Jellystone Park to shoot a project and soon crosses paths with Yogi Bear, his sidekick Boo-Boo, and Ranger Smith.

American Humane Association Certified Animal Safety Representatives™ were unable to directly supervise the animal action in Yogi Bear because it was filmed outside the U.S. and the production did not establish a contract for our oversight.  Warner Bros. did provide a pre-release screening of the film, but since American Humane Association could not witness the animal action firsthand, the film has received a Not Monitored rating. The live animal scenes included mild to moderate dog action.