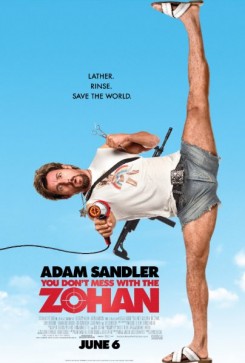 You Don't Mess with the Zohan

Zohan (Adam Sandler) is an Israeli commando who fakes his death. He comes to America to pursue his life long dream of becoming a hair stylist

You Don’t Mess With the Zohan is a Screen Actors Guild (SAG) production, and therefore was required to provide American Humane’s Certified Animal Safety Representatives  on-set access whenever animals were used. However, due to late notification, American Humane’s Film & Television Unit was unable to directly supervise all scenes in which animals appeared. Columbia Pictures did provide a pre-release screening of the film, but since American Humane could not witness all the animal action firsthand, the film has received a Not Monitored rating.