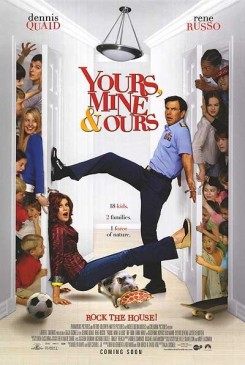 Yours, Mine and Ours

In this remake of the classic 1968 screwball comedy, a widowed Coast Guard Admiral who has eight children marries a free-spirited handbag designer with ten kids of her own. When Frank Beardsley (Dennis Quaid) and Helen North's (Rene Russo) very different childrearing styles collide, the kids come up with a plan to break up their parents and go back to the way things were. If only someone had told them to be careful what they wished for!

In an opening scene, chaos reigns at the North household as their Vietnamese pot-bellied pig "Fiona" trots out of the house and across the lawn carrying a pizza in her mouth—with three dogs, a cat and a crow trailing after her in hot pursuit. Before filming, trainers rehearsed each animal individually and got them comfortable for work as a group. After placing a fake pizza in the pig's mouth, the trainer cued Fiona to go to a second handler who stood outside calling the pig. After waiting a few beats, two other trainers hiding in the house released the dogs and then the cat, while a fifth handler released the bird from its crate.

Perceptive viewers may notice that one of the dogs has a cast on one leg. The dog was gradually conditioned to wear this slip-on wardrobe/prop piece, which was specially designed for him.

One scene intimates that "Rainbow" the hamster is lodged in Naoko North's (Miki Ishikawa) saxophone. A forceful burst of air frees the hamster and it falls on Max's (Jerry O'Connell) head and onto the floor, before running away. The director filmed this animal action sequence in multiple cuts, and a fake hamster was dislodged from the saxophone—not the live rodent. A trainer standing on a ladder just above frame gently released the hamster onto the actor's head. O'Connell then shook his head and the hamster fell off. Two crew members held up stunt landing pads to catch the hamster, and another trainer stood with a towel behind the actor to catch the rodent if it fell in the wrong direction.

To complete the sequence, the trainer removed the hamster from its cage and placed it on mark on the floor for the A to B shot of the rodent running off camera. Rainbow was safely retrieved at the end mark and received a food reward for the performance.

Hoping to strengthen the Beardsley-North interfamily bond, the entire gang goes on a sailing trip and brings Fiona along, too. Throughout this scene, Fiona sat or stood on a towel for traction, and wore a leash and harness held taut by unseen trainers sitting under the boat's forward hatch. Additionally, one child sat on each side of the pig to keep her steady. Fiona wore a life preserver and trainers applied sun block to prevent any discomfort from sun exposure. Further safety precautions included having two rescue/safety boats nearby, as well as two divers in water alongside the sailboat. Filming took place in a harbor about three-quarters of a mile from shore.

Later in that sequence, sloppy sailing causes Fiona to slide a bit on the boat's deck. The towel that Fiona sat on covered and disguised a translucent mat which had straps attached to manipulate it from off screen. A props person on deck pulled the straps and moved the mat, towel and pig forward as if sliding across the deck. The boat was docked for this shot, and both trainers were on board with the pig.

The warring children have a free-for-all with blue paint in the front hall of the light house. Before long, Fiona, the dogs and Rainbow the hamster are also involved in the fray. Coloring on the dogs consisted of non-toxic Tempera paint, which contains natural, biodegradable proteins and is easily washed out. The application occurred primarily on the back up to the top of the head—not on the face or muzzle, or around the eyes. The "paste" that the kids fling about was actually made of pudding, while the coloring on Fiona's back came courtesy of "Streaks and Tips", a commonly used colored hair spray that washes off with soap and water. The blue coloring on Rainbow as he crawled out of the paint can was achieved with blue frosting.

Later, Fiona is passed above everyone's head as she "crowd surfs" during the kids' illicit party. One trainer held up the pig's front end while another handler brought up the rear. The trainers lifted her up, walked ten feet, turned and walked back. Other extras crowded around the trainers to help hide them and make it look like they were moving Fiona along. American Humane's Certified Animal Safety Representative monitoring the action requested a limited number of takes and made sure the extras knew how to behave around the animal.