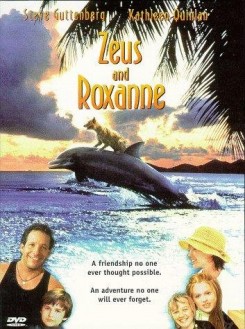 Zeus And Roxanne is a film about Zeus, a dog, and the unusual relationship he has with a dolphin. Mary Beth is a Marine Biologist and Zeus's neighbor. Zeus follows Mary Beth to work one day and jumps onto her boat, going out to sea for the day. While on the boat, Zeus sees Roxanne, a dolphin, that he had seen earlier while sitting on the beach. Zeus and Roxanne become friends and at the same time Mary Beth falls in love with Terry, Zeus's owner.

There were 12 dolphins used in the film that were provided by Unexco. These dolphins had no prior film experience, however, they were accustom to swimming with people daily. The trainers worked with them for several weeks to prepare them prior to filming.

In the morning Zeus takes a morning stroll and decides to snatch a paper for Terry, his owner. Mrs. Rice, the neighbor and owner of the paper, beats him to it. Trainer #1 cued the dog with a verbal command while trainer #2 called him using a food reward.

Later Zeus catches a glimpse of Mrs. Rice's cat, who has strayed outside of her yard. Zeus immediately starts to chase the cat as it runs for the protection of the fenced yard. The two are seen running through the house, over furniture, under the house, and up some steps. Zeus is also seen knocking over a flower pot just before the cat exits from under the house, ending up on a large tree limb with Zeus on the porch barking at him. This scene was shot in several cuts. A non skid surface was used for all of the chase segments of the scene. The cat ran from A to B to C through the house cued with a buzzer. Then the dog followed the same pattern. When Zeus chases the cat down the stairs and under the house, again this portion of the scene was shot in several segments with a buzzer and food used to cue the animals. When Zeus knocks over the flower pot, the dog was placed on a stay command looking down and then given a verbal command to push the flower pot off of the porch. The cat was placed under the house and called to his next mark with a buzzer. At one point the dog is seen digging up Mary Beth's garden looking for the cat. For this portion the trainer placed the dog on his mark and gave him a verbal command to dig with food as a reward. The cat was placed on the tree limb by his trainer and retrieved at completion of the shot.

While on Mary Beth's boat, Zeus gets to close to the edge of the stern and falls into the water. Zeus barks in the direction of the receding boat, however, no one hears him. In the meantime, a shark breaks the surface and moves quickly in his direction. Roxanne surfaces and notices the shark and she swims towards Zeus, picking him up on her back. Zeus rides on Roxanne's back to the safety of the boat. As she approaches the boat, Zeus jumps from her back to the boat, barking his thanks as he shakes the water from his fur. This scene was shot in cuts. An animatronic dolphin was used for this scene. For the portion of the scene when Zeus falls overboard, the scene was shot before a blue screen. The trainer placed the dog on a flat board that was tipped side to side to simulate a rocking motion. The board was approximately 18 inches from the ground. When the dog is seen swimming from point A to B, two trainers were present in the water at all times. A diver was in the water in the background wearing a shark fin. The animatronic dolphin moved towards the boat and with the help of the trainer the dog climbed on its back.

Claude, another biologist, is on the dock beside his boat when Zeus and Mary Beth approach. While Mary Beth is talking with Claude, Zeus inches towards his briefcase sitting on the dock. Zeus nudges the case with his nose, knocking it into the water. The trainer placed the dog on his mark and used verbal and hand commands to cue the dog to push the briefcase.

At the end of the summer, Terry, his son Jordan, and Zeus move from the island to a town inland. Zeus, missing Roxanne, decides to run away and head for the island. He pushes a lounge chair across the patio with his front paws then he does the same with a small patio table. After getting a good start, Zeus runs towards the chair and jumps from the chair to the table, over the balcony, and into the pool below. He is then seen running down the beach. This scene was shot in cuts. The trainer placed the dog on a platform overlooking the pool, two trainers were strategically placed and a stay command was given. When he is preparing his ramp, he is cued to stand on his hind legs and push at the lawn furniture. A line was attached to the furniture and it was actually pulled across the floor by a prop person. The dog then climbs up onto the furniture and jumps over the railing, landing in the pool. This portion of the scene was actually filmed on the ground before a blue screen. It appears as though the dog is falling three flights, however, when Zeus is seen landing in the pool, he actually jumps from an 18 inch platform on the side of the pool. Trainer #1 cued him with verbal commands to jump while trainer #2 was waiting in the pool and pushed the dog out of the water.

Zeus makes it to a local gas station where he sees a truck pulling a boat and trailer. He decides to hitch a ride so he jumps into the boat, sitting in the drivers seat as the vehicle travels down the road. When the boat stops, Zeus jumps out and runs down the dock. The trainer placed the dog on the boat in a "sit stay position". Trainer #1 was positioned at the bow using hand and verbal commands to cue the dog. Trainer #2 was lying on the floor of the boat holding a safety line attached to the dog.

Claude catches sight of Zeus and tosses a net over him, picking him up. He then carries Zeus aboard his boat. Zeus bites at Claude's ankle just before Roxanne is sighted. Roxanne circles a few times as Zeus barks a warning to her. On her last turn, she jumps over Claude and his helper and they fall into the net, trapping themselves inside. Zeus pushes the button to make the net go up and down into the water. He then hikes his leg, urinating on the two men. For the portion of the scene where Claude tosses a net over Zeus, the trainer placed the dog in a sit/stay position and a light net was placed over him. When Zeus bites at Claude's ankle, the trainer, acting as a double for the actor, placed the dog on his mark and cued him with verbal commands to grab at his ankle. Later the trainer cued the dog to hike his leg as the area was then sprayed with fake urine.

After Terry and Mary Beth's wedding, Roxanne is seen catching the bouquet of flowers in her mouth then swimming away. This shot was filmed at Unexso training area. The trainer dropped a bouquet of flowers in the air and on command the dolphin caught them. The dog was sitting on a platform above the dolphin training area and additional trainers were strategically positioned around him.

On one of his trips with Mary Beth, Zeus and Roxanne are seen playing a game of ball. Roxanne tosses the ball to Zeus and he catches it in his mouth. The dolphins were led out to the filming area by the Unexco trainers. Filming was done while the dolphins were engaging in their normal routines. The rubber ball was then tossed into the water and the dolphin began tossing it into the air. The dolphin did not actually toss the ball to the dog.

One day on the beach Jordan is taking pictures of Mary Beth's daughters and Zeus buried in the sand. The dogs head and paws are seen sticking out of the sand. For this scene the trainer placed the dog on the sand and lightly covered his stomach and gave him a "stay command". The sand used under and on top of the dog was of a cool temperature. The amount of sand placed on the dog was just enough to cover his stomach which enabled him to move or get up at any time.

There are several scenes where Zeus is seen walking A to B down the beach, pier, or in town, sitting on a bed wearing costumes, riding in a vehicle, or merely lying on the floor. He is seen with his paws propped up on a desk, counter, window, table, etc. Many times he is seen communicating with the dolphins either by barking, waving his paws, or playing ball. All of these behaviors were pre-trained and the trainer cued him with verbal or hand signals with food as a reward.

All of the scenes of the dolphins swimming and playing in the water were filmed as they naturally acted and inserted during post-production where needed. The dolphin behaviors start with a target and are reinforced on a variable reinforcement schedule.

Other animal action consisted of a chimp being held by an actor and a St. Bernard on a leash. The trainer placed the animals with the actors and retrieved them at completion of the shot.