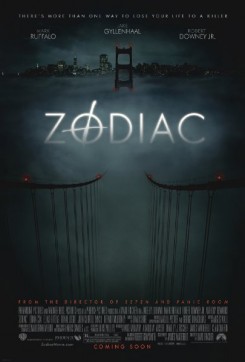 A cartoonist (Jake Gyllenhaal) and a police officer (Mark Ruffalo) share an obsession for solving the mystery of the person responsible for a string of gruesome, random murders. Zodiac is based on the true story of the notorious serial killer that terrorized San Francisco in the 1960s and '70s.

As a police officer approaches a vehicle parked near a lake, several geese cross in the foreground. Trainers placed pens on both sides of the camera range where the geese walked. Geese were released in pairs by an offscreen trainer and they walked across camera range, where another trainer was waiting to retrieve them. A goose was put into each pen to entice the wandering geese to the pens.

Police officers visit a trailer and find several squirrels living inside. One squirrel is in a cage in the middle of the room, one is in the kitchen sink, and another scampers up the drapes. After placing a squirrel into the cage, the trainer held food over the cage to keep the animal active. Another squirrel was placed in the kitchen sink with some treats, and the trainer stood just off camera. Another trainer placed the third squirrel on its mark and used a combination of hand signals and verbal cues to get the animal to run across the couch and up the drapes. The American Humane Certified Animal Safety Representative conducted a safety meeting with all cast and crew members prior to filming. Only the necessary cast and crew members were allowed on set for the scene.