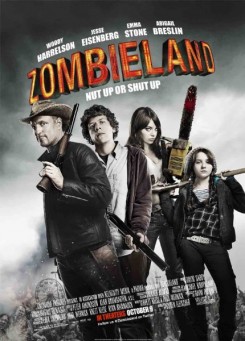 Two men who refer to themselves as Tallahassee (Woody Harrelson) and Columbus (Jesse Eisenberg) team up with two women, Wichita (Emma Stone) and Little Rock (Abigail Breslin), to survive the zombies who have taken over the world.

As Tallahassee talks about his beloved puppy that he had before the zombies took over the world, we see flashbacks of him cooking animal shaped pancakes for his son and the puppy and feeding the puppy a pancake; laying on a bed with the puppy; kissing it and blowing raspberries on its belly; playing with the puppy in a yard; and bathing it. The puppy came from a local shelter in Georgia, where the movie was filmed. The trainers worked with the puppy before filming began to prepare it for the mild action. After filming, Abigail Breslin, one of the stars, adopted the puppy and took it home with her. The cast and crew were introduced to the puppy and instructed on its proper handling before filming began. All of the mild action in the puppy scenes was achieved in the same manner and in separate shots. A trainer placed the puppy on its mark and stood off-camera. The food the puppy ate was safe to consume. After filming the scene in which the puppy was bathed, it was immediately retrieved and dried off. All grounds were checked ahead of time for hazards and the cast and crew allowed on the set were limited. The scenes inside the house were filmed on a closed set and the scenes outside the house were filmed in a fenced-in yard. Two trainers were present at all times. Woody Harrelson spent some time with the puppy before filming began so it would be familiar with him during filming.

In one scene, Tallahassee and Columbus push their car and some animals are seen grazing in the background. In another scene, a bird flies by as Columbus walks down the street. All of these animals were caught on film in their natural environments.

The mice that come out of an opened door in the amusement park were computer-generated.