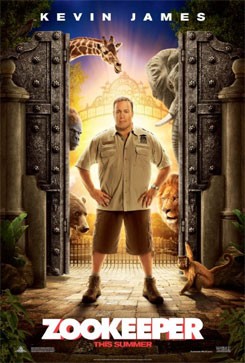 American Humane is deeply saddened to report the unfortunate death of a giraffe that was filmed for this project. The death was determined to have resulted from unknown causes unrelated to the production’s use of this animal. With the full cooperation of the production company and Sony Pictures, American Humane conducted investigations into the incident and found that the death was unpreventable. There was no indication of mistreatment or neglect. The necropsy revealed nothing alarming, and any health issue the giraffe may have had was likely related to its mature age. Neither the filmmakers nor the animal trainers failed to comply with American Humane’s Guidelines for the Safe Use of Animals in Filmed Media.

When a zookeeper’s girlfriend dumps him because she’s ashamed of his job, he contemplates leaving the zoo, which prompts the animals (who reveal to him that they talk when humans aren’t around) to fight to keep him around. They decide to help him win over his girl in hopes of preventing him from leaving.

This film was set at the Franklin Zoo in Boston, which is an actual operating zoo. Several of the background animals were filmed in their regular enclosures at the zoo. Others were highly trained “actor” animals who were well rehearsed for the action, most of which was mild and simply involved a trainer cuing the animal with commands, bait sticks, buzzers — the animals were accustomed to all the action. All grounds were inspected for hazards and sets were closed off and secured. Much of the animal action took place in front of a green screen. Cast and crew members were introduced to the animals and instructed on their proper handling.  When animals and humans were seen on screen together, they were usually filmed separately and digitally composited later. This is also true whenever animals of different species were seen together. Any item an animal pushed or held was a lightweight prop. The animals were surrounded by off-camera trainers or costumed trainers.

When the horses were ridden along the beach, the actors were experienced, and the fireworks in the background were CGI.

When dogs were seen in the background at the large park, these leashed dogs were with their actual owners, and the action was very mild.

For all wolf scenes, a trained wolf was used for these scenes, and the actor was filmed separately. For the limp, trainers briefly tied the wolf’s leg up using a soft rope around its shoulder — the wolf was trained to “hop” along. Trainers also cued the wolf to put its leg up as if urinating (the urine was added in post production). When the wolf was bathed, trainers placed the wolf on its mark in the tub and lathered it with nontoxic baby shampoo and warm water, right before the actor stepped in and pantomimed giving a bath. When two wolves were seen together, they were accustomed to being together and comfortable with the mild action.

When the bears were seen (together) performing such action as walking on hind legs and swatting at the air, these bears were siblings, and the bears were cued for the action by the trainers and rewarded with food. No humans were nearby, so when a bear slapped Griffin (Kevin James) on the rear, the actor was filmed separately. When the bears “hugged” each other, as if wrestling, this was also a well-trained behavior that the bears associated with playful interaction. The set was enclosed with a hotwire fence as a precaution. When the boy threw ice at the bears and then fell into the enclosure, the boy was filmed separately in an empty enclosure, and the bears were added in later and combined with the boy footage. Trainers tossed prop ice made of soft gelatin near the bears, which when combined with the boy footage made it look like he threw ice at them.

When Griffin fed the giraffe a carrot, this was the giraffe’s regular diet, and the actor was instructed on how to feed the animal while trainers stood nearby.

All lion action was filmed without actors or other animals present. Trainers cued the mild walking and lying action and the growling. When the lions appeared to encounter the two girls, no humans were present, and trainers threw meat into the enclosed area and used a bait stick to get certain looks. The two lions were acquainted with each other and accustomed to being together, and all the lion action was mild enough to be easily cued by trainers.

The monkey used in this film was extremely well trained for all the action, which the intelligent animal found easy to perform. When the monkey picked the locks and released the animals, the lock and the pick were props (the lock had a metal flap rigged to open), and the trainers cued the monkey to “get up” and “go to” the different areas — the animals that were released from their cages were filmed separately. The scene in which the monkey leaped from the tree to the cages, finally turning on the lights at the fuse box (a non-working prop) and hanging from the latch of the bear door, this was also all cued by trainers and filmed in short takes. The cage doors were rigged to open by crew members. When the monkey licked its arm, the trainer put pudding on the animal’s arm for it to lick.

When the elephant pushed down the tree, this was actually a pole rig with a net of hay on the end, and the trainer cued the elephant to nudge it; a crew member controlled the rig to do the actual pushing down of the “tree.” The elephant was accustomed to the action of “sitting” in certain scenes.

The eagles, vultures, and crows had leather straps attached to their ankles that were held by a trainer. The birds in cages were simply filmed in the background in their cages, and the non-caged parrot at the party was cued to stay on its perch. When the eagles flew from the closed-off cage to their enclosure (with no way to get out), they were allowed to fly to a perch/branch at liberty and were retrieved by trainers after the scene. All birds were filmed separately and in the absence of other animals.

When “Venom” (the reptile zookeeper) had the bearded dragons/lizards on his shoulder/arm, trainers secured the animals to his arm moments before filming this mild action and retrieved it immediately after.

The quills that appeared to come off the porcupine were props.