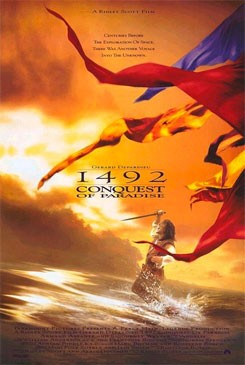 1492: Conquest of Paradise is a massive historical drama made in commemoration of the 500th anniversary of the voyage of Christopher Columbus to the New World.

The story begins with the efforts of Columbus to find a patron for his venture. At a time when those condemned as religious heretics are burned at the stake, he must argue his case before a religious commission where any wrong word might be his death sentence. After seven years of trying, he is turned down once again because the commission is reluctant to give him any power. Columbus will not relinquish his passionate dream and, after the fall of Granada to Spain, and Spain's victory over the Moors, he goes to Queen Isabella. He argues that his voyage will bring her gold and the greater glory of both God and Isabella. He also makes his personal demands such as wanting to be knighted, to be declared governor of all the new land, and to receive a percentage of the new wealth. Still savoring her moment of triumph, Isabella at last grants him his wish.

Columbus sets sail with his three ships and crew. He has lied about the length of the voyage as he knows it will take longer. When his men grow unhappy he passifies them by offering a reward to the first man sighting land. They arrive and are greeted by friendly natives. After several months of exploring the islands, he is puzzled as nothing compares to Marco Polo's description, and he cannot find the mainland he knows to be there. He decides to return to Spain leaving 39 men behind to build a fort.

Columbus returns to Spain in triumph. Up to this point Columbus has been portrayed as an ambitious man with compassion, vision, and high ideals. He espouses a policy of peaceful coexistence with the natives of the new land saying "They are not savages, and neither will we be." However, with the second expedition, which brings many more ships and men, Columbus begins losing control. The ambitions and greed of those with less lofty ideals eventually turn the tropical paradise into a living hell where violence and brutality abound.

A large variety of animals are seen primarily as background or to enhance the atmosphere. These animals include dogs, camels, mules, sheep, peacocks, snakes, and insects. Being a period film, horses of course are present in many scenes, sometimes with riders or merely as atmosphere. In one scene a magnificent white charger is ridden and struts around a ring. The Spaniards brought their horses to the new world and one nobleman is shown astride a beautiful brown horse as the horse rears and paws the ground while natives circle and pet him out of curiosity. This horse is a pampered pet. However, when men and oxen are called upon to move an enormous metal bell the nobleman is ordered to use his horse to help hoist the bell into a bell tower. With an approaching storm, horses are growing restless and rearing. In the aftermath of the typhoon the people are seen clearing away what it has left in its wake. Among the debris are the carcasses of several dead animals.

A variety of colorful, tropical birds are visible in numerous scenes. A parrot flies A to B through jungle foliage and a flock of birds fly out of the trees. In one scene a bird flies through the air, Christopher shoots at it and misses. However, when a native shoots at it with a bow and arrow, the bird is shown with an arrow through its' body and goes down.

No representative of American Humane was present during the making of 1492 as this was a foreign production produced jointly by British, French and Spanish interests. Scenes involving animals were filmed in Spain and Costa Rica and local animal trainers were used. American Humane obtained the names and phone numbers of the trainers through the film's United States distributor, Paramount Pictures. Because of the language barrier, we enlisted the aid of an interpreter.

Trained horses were used for any scenes that required special skills such as rearing. For the scene after the typhoon, some fake animals were used, but they also used a real dead cow. We attempted to find out the circumstances and source for the dead animal, but could get no further information. We could get no information regarding the scene where the bird is shot with an arrow.