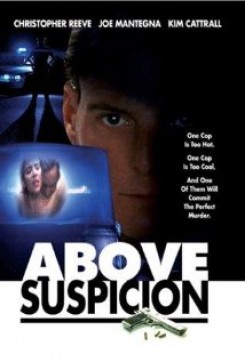 Above Suspicion is a about Dempsy, a police detective, who is the perfect husband, father, son, and brother. After he is shot in the line of duty his life begins to fall apart.

While facing eternity in a wheelchair, Dempsy starts to examine his life and does not like what he sees. He realizes his wife, Gail, is anything but happy and later he finds out just how unhappy she has been. She has been having an affair with his younger brother, Nick.

Dempsy stages an attempted suicide so his neighbor will see him from her window. The next day the neighbor takes a walk with her dog and goes to see Gail at work. She tells her what she witnessed the night before. Dempsy makes Gail and Nick believe he wants to die and he begs the two of them to help by staging a burglary and shooting him. Dempsy is no dummy, however, and with careful planning he sets Nick and Gail up to take the fall for their own murders. When Nick and Gail come into the house, Dempsy is waiting for them in the den. Nick is suppose to shoot Dempsy, but at the last minute he can't go through with it. Before Nick can stop her, Gail turns and shoots Dempsy in the chest. Gail, expecting to see her husband dead in his chair, is quite shocked to see him alive and pulling a gun on her and Nick.

Dempsy explains to the shocked pair that he found out about their affair when going over the phone records. He goes on to explain how he devised this plan to eliminate them and how he put blanks in their guns. He then stands, and while holding on to his chair, shoots both of them.

The officers at the police station find a long trail that Nick left while getting the necessary things he and Gail needed to stage the robbery/murder. What they do not know is that it had been carefully planned by Dempsy. Dempsy even acts shocked when his buddies tell him that his brother was sleeping with his wife.

One detective on the squad, however, does not quite believe that Nick, who is a screw up could kill Dempsy, so he keeps digging even after the Internal Affairs Department states there are no grounds for an on going investigation. The detective accuses Dempsy of being able to walk and goes so far as to stab his leg with a letter opener in court during the inquisition. But Dempsy is smart and had anticipated something like this, so he doesn't even flinch. At every turn he out wits the sly detective. After the inquisition, the detective is let go from the police force.

Dempsy gets on with his life and even though he can walk, it must forever be his secret. He is resigned to live in a wheelchair but can now finally put his life back in order once again.

There are two scenes with a dog in them. When Gail's neighbor goes to see her about Dempsy's suicide, she takes her dog with her. She walks the dog on a leash to the office and ties it up outside to a tree. In another scene the dog is on a bed and jumps down onto the carpeted floor.