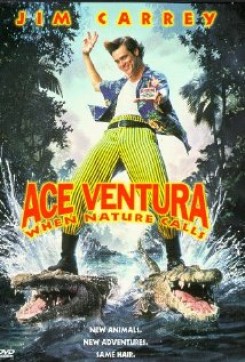 Ace Ventura: When Nature Calls, sequel to Ace Ventura: Pet Detective, finds the wacky pet sleuth in Africa hot on the trail of the kidnapped sacred white bat of the Wachati tribe. If the white rodent is not found and returned, tribal war will ensue and the marriage between the princess of the Wachati and the prince of the Wachootoo will be jeopardized, since the bat was to be the princess' dowry.

The film opens with a parody of a scene from Cliffhanger in which the hero, although trying valiantly, fails to prevent the heroine from falling to her death. In this case, the hero is Ace and the heroine is a raccoon. After the harness snaps and the raccoon slips from Ace's grip, we see the animal fall miles into the vast Alpine terrain and the face of Ace contorts into an anguished cry. This tragic accident drives Ace to the mountains of Tibet where he retreats with the monks to grieve, meditate and gain back the life force. He is called out of this spiritual hibernation by an English emissary, Fulton Greenwald, sent by the African consulate. Greenwald seeks his help in finding the sacred animal of the Wachati tribe.

Once in Africa, Ace upsets a social gathering at the British Consulate before being briefed on his mission. He encounters a pompous woman decked in a fox stole accompanied by her skinny husband. Ace is horrified by the pelt and confronts her. She replies that there is nothing wrong with enjoying the fruits of nature. He agrees by knocking out the husband and modeling his limp body as if it were a fox stole. He has managed to shock the party, which includes community dignitaries such as the Console General and a colorful character named Burton Quinn who travels with a raven perched on his shoulder. After the party, Fulton takes Ace to meet the Wachati tribe and start his investigation of the sacred bat tent and the sacred bat caves.

In true Ace Ventura spirit, there is much mayhem before the white bat is recouped and the motive for kidnapping discovered. There is also lots of interaction with an array of African animals and both native tribes.

Throughout the film we see a large variety of animals, both real and animatronic. Ace is joined in many scenes by his trusty companion, Spike, a capution monkey. Spike is seen doing a variety of tasks, such as riding on Ace's shoulders and even being captured with him. For all of Spike's scenes, his trainer placed him and gave him hand and voice commands with food as a reward. The animal was trained in pre-production to do many behavioral stunts.

When they first arrive in Africa, Ace takes Greenwall and Spike on a wild ride in a jeep. Ace takes a bumpy and risky shortcut through the jungle and then literally flips the jeep into the air right into a tight parking space at the consulate. This scene was shot in cuts. The reaction shots of the monkey covering his eyes and scratching his head were shot separately and edited into the sequence in post production. The monkey was not in the jeep for the ride, nor for the stunt.

For the scene where Spike is seen tied down on the raft with Ace, the monkey was trained to lie still with a rope lightly wrapped around his limbs to give the appearance of being tied down. Trainers and handlers were close by during filming both on an accompanying raft and in the water.

In the opening sequence of the film where Ace attempts to rescue the raccoon from the Alpine ledge, three real raccoons, a fake and an animatronic animal were used. The raccoon is first seen on a narrow rock ledge on the side of an Alpine cliff. Ace rigs a line to span the ravine, and we next see the raccoon hanging from a harness as Ace tries to climb with her to safety. In close up shots, we see the pieces of the harness start to break and unravel and the faces of both Ace and the raccoon. Finally, Ace is struggling to hold onto the raccoon by merely a hand grip. Once the little paw slips from Ace's grip, the animal plunges to its death. The scene was shot in many cuts. It was filmed against a blue screen and the trainer was never more than an arm's length away. When the animal is seen falling, it was actually being held up by the trainer through a hole in the blue screen and the camera pulled away quickly making it appear as if the animal was falling. When the raccoon falls off of Ace's back and then later from his grip, a fake animal was used. There are some shots where the animal is seen hanging by his broken harness, but is still attached to Ace. For this shot, the raccoon was fitted with a special harness and secure wire that hung from Ace's belt. The breaking harness was merely a costume. The animatronic animal was used for the action shot at an outdoor location. All of this film footage was edited into the Alpine setting in post production.

Scenes in which animals are seen in questionable circumstances, such as when Ace and the lions are eating the dead zebra or when Ace is fighting the crocodile, were done using fake animals. The zebra carcass was styrofoam with fake blood and the lions were placed by their trainers using lightweight tie downs. Ace was shot separately and placed into the scene in the editing process. The crocodile, the white bat and the baby eagle were all animatronic animals. For the scene where we see a gorilla scare the Console General, it was a man in a gorilla suit.

In a climactic scene, when Ace and his animal friends take over the consulate, we see a variety of animals stampeding through the building. First we see the elephant who breaks through the wall allowing all the other animals to overrun the offices, including Ace himself arriving on the back of an ostrich. This scene was shot in many cuts. The elephant responded to his trainer's voice commands and pushed against a lightweight break-away wall that fell apart easily. All of the animals seen were rehearsed in pre-production and responded to their trainers' voice commands. They were released in groups, herded through the set in a circular pattern and guided by fence panels. There were also separate shots of animals seen in small groups or singularly, appearing to be part of the office takeover. These animals, such as the chimp with reading glasses who is tearing up reports and the mouse who comes out of the sofa, were animals that were placed by their trainers and given hand and voice commands with food rewards. These shots were edited in in post production. The ostrich that is seen being ridden by Ace was trained in pre-production using weights that were gradually increased over time. The weight of the actor was in the median range of what the animal was capable of carrying. For the actual shot with the actor, the ostrich only ran thirty feet.

The other scene that involved a variety of exotic animals appearing in the same shot was at the Tibetan monastery. Greenwall is introduced to Ace while he meditates in his room surrounded by a peaceful menagerie. The animal entourage consists of Spike, a lion, a tiger, dogs, a llama, a cat, birds, a sheep and a tiger cub. For this scene, the animals were filmed separately or in small groups. These were later edited together to make it appear as if the animals were all in the same room.

There are several scenes at the consulate where the elephant, Boba, is seen responding to commands either from Ace or from his African trainer. When Ace arrives at the consulate, he notices an elephant being trained on the front lawn. The animal merely stands up on his back legs when the trainer gives a voice command. After Ace meets the Console General and is shown his "trophy room" filled with mounted heads of taxidermic animals, Ace decides to have an animal do some of the mounting. Leaving the consulate, Ace spies the elephant in the yard and calls to the animal. The elephant walks over toward Ace and proceeds to sit on the Console General's Bentley, which causes the car to collapse and Ace to chuckle. For this scene, the elephant responded to his own trainer's voice command and walked from point A to point B, backed up and then sat on the car. The car had been specially prepared to fall apart easily. All the taxidermic animals were rented by the prop department for the film.

Later in the film, Ace again is at the consulate, however this time he is being arrested by the corrupt officials. As he is being loaded into the officer's jeep, he sees Boba and begins calling to the elephant. Boba charges the jeep, overturning it and freeing his buddy, Ace. For this scene, the elephant responded to his trainer's voice commands and moved from A to B, rose up and placed its front legs on the jeep. The jeep was actually attached by a winch to another truck located off camera. The truck pulled the jeep over making it appear as though the elephant pushed it.

There are many scenes where animals are seen as background atmosphere. For the scene where Ace is joining the chimps in a grooming session, the animals were placed by their trainer and given hand and voice commands. The actor spent time in advance of shooting with these particular animals so that they were comfortable with his being amongst them. Horses are seen at the consulate in a polo game and one is seen performing dressage movements. The horses were being ridden by experienced wranglers. One horse appears to be hit with the crop by his rider, the Console General. Later, Ace takes the opportunity to smack the General with the crop so that he can feel what the horse felt. For this scene the horse is not actually touched. A sound effect was added in post production to give the effect of the crop hitting the horse's flank.

When exotic animals are seen in the background, they were placed by a trainer and secured by long leads and halters or placed in areas that were fenced. At the tribal villages, background animals such as chickens, pigs and goats are seen roaming around. These animals were placed on the set by trainers and allowed to walk around freely.

All live animal action was filmed in the United States. American Humane was on the set throughout filming and monitored the animal action with assistance from the John Ancrum S.P.C.A. in South Carolina.