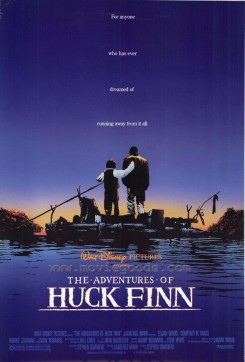 Adventures of Huck Finn, The

Based on Mark Twain's original character and set on or along the shores of his beloved Mississippi River, this Huck Finn barely survives one adventure before he finds himself smack in the middle of another and another, each with a present day perspective. Huck is a handful for the two elderly women who care for him. He's a mischievous rascal whose vivid imagination inspires numerous tall tales. The Widow Douglass and her sister, Miss Watson, took the motherless, neglected boy in a year ago when he was deserted by an abusive alcoholic father. When his father learns Huck's mom's left him $600, he wants Huck back, but when he learns Huck can't collect the money until he's of legal age, he wants Huck dead so he can collect the inheritance as Huck's next of kin. Pap steals into the Douglass house in the middle of the night and abducts his son. He takes the struggling Huck to his cabin where, in a drunken rage, he tries to kill him. Huck survives the attack and the next day, when Pap awakens sober, he doesn't remember the ordeal of the night before. Huck decides the only way to have peace from Pap is to make him believe he's dead. He cleverly stages the circumstances of his demise, then runs away. Along the way he encounters another runaway, his best friend, Jim, a slave owned by Mrs. Watson. When a slave trader offered Mrs. Watson $800 for him, knowing times were tough, Jim was afraid she'd take it, so he ran away. He wants to travel to a free state so that he can make enough money to buy his family's freedom. Huck decides to help Jim and the pair set off by raft on the mighty Mississippi unaware there is a $400 reward for a runaway slave who is wanted for the murder of Huckleberry Finn.

In order to stage his own demise Huck shoots and kills a wild boar which he carries into the cabin and lets it bleed all over the floor. He then drags the boar out of the cabin to make a bloody trail. The shooting of the boar is not shown. Huck merely points a rifle and shoots. The source for the dead boar was a theatrical supply house which rents or sells a variety of props for stage and film productions. Various animal skins and taxidermied animals seen at other times in this film were also rented from the same supply house. The dead boar's blood smeared around the cabin was stage blood. A rat is seen briefly on a kitchen floor as Huck throws a piece of crockery at it. This scene was shot in cuts. The rat was not present when the crockery was thrown and shattered. There are several pursuit scenes in this film where characters are chased either by hound dogs on leash or men on horseback. The scenes with the dogs were achieved by the dogs pursuing a food reward not a person. In the horseback chase scene which cuts through a river as gunfire is exchanged, only trained riders and horses were used. Quarter loads were used for the gunfire and the horses had the added protection of cotton in their ears. The creek bed was carefully checked for any hazards prior to use and the scene was carefully rehearsed numerous times in advance of filming. The rider who falls off his horse was a professional stuntman. Horses are seen at a various other times either being ridden, or pulling wagons or carriages, or merely as background or atmosphere. Chickens are also seen as background or atmosphere. There are chickens in crates at a dock-side wharf. At one point a character holds a chicken under his arm and then places him in a create. In another scene Huck holds a fishing pole while carrying a string of fish. These were purchased dead fish. This film was shot in Nachez Mississippi where the Nachez-Adams County Humane Society monitored the horse pursuit scene. Other animal action was not monitored.