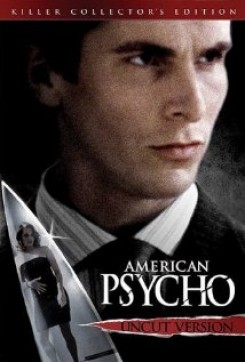 American Psycho is drama that delves into the psyche and paranoid psychosis of a very young and successful Wall Street star named Patrick Bateman. He is part of a world that believes you can never be too wealthy, too beautiful, too educated, too successful or too competitive. Success however has its dark side.

Animal action consisted of a dog, a pig and a cat. The dog is seen briefly as the companion of a homeless man. When the homeless man meets a violent fate, his dog is an unsuspecting victim as well. The perpetrator stabs the man and stomps his dog. This scene was shot in cuts and the live dog was used to establish the shot and then replaced with a fake for the stomping action.

Patrick's girlfriend has a very posh Christmas party and shows off her pampered piglet. She holds the little pig in her arms and then carries it off to another room.

Patrick encounters a cat that jumps up onto an ATM machine. He grabs the cat and points a gun at its head. When a woman distracts him by asking what he is doing, he tosses the cat to the ground. The trainer handed the actor the cat and was out of camera view to catch the cat as the actor tossed it to the trainer's waiting lap.

For more stories on animals and their celebrity humans and other movie news go to "Reel Pets" at www.animalfair.com or see Animal Fair Magazine.