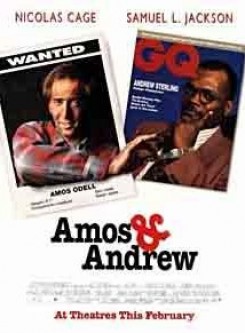 Amos & Andrew is a comedy of errors about mistaken identity, prejudice, social stereotypes and other human foibles.

Andrew Sterling is an immensely successful playwright who has just purchased a beautiful home on an exclusive island off the New England coast where many other rich and famous people make their summer residence. Unlike his well-to-do new neighbors, however, Andrew is black.

While Judy and Phil Gilman are taking an evening stroll with their dog Rommel, they see Andrew through a window of his new home as he tinkers with his expensive stereo system. Not knowing the house has been sold, they jump to the conclusion that Andrew is stealing the stereo and they call the police.

Police Chief Cecil Tolliver is running for County Commissioner and seizes this call as an opportunity to score some points with the voters. He summons his men who silently surround the house. When one man accidentally sets off Andrew's car alarm, Andrew comes out with the remote device in his hand to turn off the alarm. Mistaking the device for a gun, the police open fire, but, fortunately, Andrew makes it safely back inside the house. Before long Tolliver realizes his blunder and that there has been no burglary and no crime. In order to save face before the media, which have already started assembling, he makes a deal with Amos, a small time crook he has just jailed. Tolliver will sneak Amos into Andrew's house where Amos will pose as a burglar, be arrested, and then be allowed to escape. It's a simple plan, but once inside and Amos meets Andrew, hilarious complications develop.

Animal action primarily involves the Gillman's dog, Rommel, a white German Shepherd. While they walk their dog, he lifts his leg relieving himself on a variety of objects. The dog had been trained to lift his leg on cue and was not actually urinating. When the Gillmans spy on Andrew, Rommel runs up to the window and barks and snarls at Andrew, frightening him. This scene was shot in cuts with the dog responding to his trainer who was on the other side of the window giving him verbal and visual cues. Rommel is present in many scenes throughout the film performing a variety of trained behaviors, such as sitting or speaking on command, rolling over, shaking hands, etc. These were all accomplished by way of the trainer's verbal and/or visual cues with food as a reward.

In the film's climax, Andrew runs through a field as he's being pursued by two bloodhounds on leash. He's rescued by Amos who swerves through the field driving a car. This scene was shot in cuts. Rather than pursuing Andrew, the dogs were being called to their trainer and crossing from point A to point B. The car was actually driven by a stunt driver and the car maintained a safe distance from the dogs. Later, when Andrew sends the bloodhounds off on Tolliver's scent, the scene was shot in cuts and, as before, the dogs were running to their trainer rather than pursuing the actor.