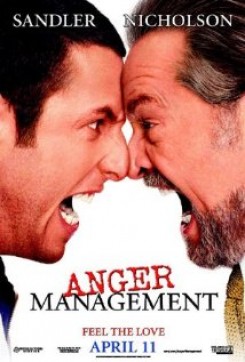 A mild-mannered businessman played by Adam Sandler, is wrongly accused of a crime and sentenced to an anger management program. He quickly discovers that his instructor, played by Jack Nicholson, has his own serious anger management problems and wonders what he will learn in this program. Together, they teach each other how to cope with anger.

Dave designs a clothing line for husky cats. Meatball, the husky cat, is his super-model. Whenever we see this cat, it is wearing a new designer outfit. The first time we see Meatball, Dave is holding him in his arms and the cat is wearing a chic sweater. He sets the cat on his desk and puts a bonnet on the fuzzy little head. A co-worker comes by to look at the cat that proceeds to hiss at him. The cat just sits on the desk for the rest of the scene as the two men converse.

Along with the cute outfits that the cat wore, it also wore a "fat suit" to make it appear as if it were overweight, or as Dave so eloquently put it, husky! The "fat suit' was made of fiber fill and was under the outfits. The clothing was removed promptly after filming stopped. Fans were provided on the set to make sure the cat did not overheat. A trainer dressed the cat and handed it to the actor. The actor set the cat on the desk and a trainer stood off camera nearby, holding up a toy to get the cat to look in various directions. The trainer used a hand signal to get the cat to hiss.

Later Meatball is sitting on the couch in Dave's bosses' office wearing a sweatshirt with the hood pulled up – very hip hop fashionable. The cat eats from a plate on a nearby table. A trainer dressed the cat and put it on the couch then stood off camera holding up toys to get the cat to look in various directions. Some cat food was hidden in the spaghetti on the plate for the cat to eat.

Dave is up on the rooftop of his building talking on the phone. There are some pigeons sitting up there too and later outside on the windowsill of Dave's apartment. Trainers taped the wings of the pigeons so they could not fly very high. On the roof, the birds were released by a trainer while another trainer stood off camera with a cage and some food. The birds were all homing pigeons and banded, even though none of them flew away. The pigeons that were on the windowsill outside of Dave's apartment had monofilament ties attached to their legs and were being held by trainers who stood off camera. Food was scattered around in both scenes to entice the pigeons to stay on their marks during the scene.

A 300-gallon salt water fish tank was set up and seen in the background in Mr. Heddin's office. An aquatic supplier provided all of the necessary items to maintain this tank, including various types of fish and coral. A professional from the aquatic supplier was on set at all times to make sure that proper care was given to the aquarium, which was returned after filming completed.