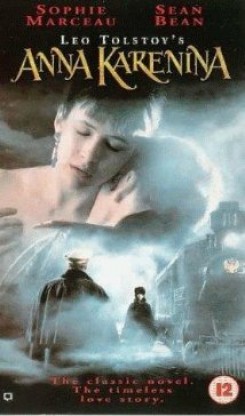 Anna Karenina is a love story about a woman, Anna Karenina, who is married and a mother, when she falls in love with another man. She eventually leaves her husband and son to be with her lover, Veronsky. Unfortunately, while waiting for her divorce, Anna suspects that Veronsky is having an affair. Anna cannot stand the thought of Veronsky with someone else, so she ends her life, leaving Veronsky to loathe himself and his life.

There is a scene where a group of wolves are seen chasing a man through a snowy field. The wolves are never seen in close proximity. Then the man falls into a pit, hanging on by a branch to avoid falling to the ground below. A growl is heard and then a wolf is seen standing on the ground in the pit. This scene was shot in cuts.

In one scene some men are hunting and birds are seen flying into the air. One of the men shoots at the birds and supposedly a bird falls to the ground. A dog is seen running A to B, retrieving the bird and bringing it back to the hunter. This scene was shot in cuts. The trainer released the birds for the establishing shot. When the dog is seen carrying the fallen bird back to the hunters, the prop department had purchased an already deceased bird from a bird farm.

There is a horse race conducted across a lawn and after clearing a hedge a horse rears, falling with the rider still in the saddle. After sliding out from under the horse, the man shoots him, ending his misery. This scene was shot in cuts. A trained rearing horse was used for this scene and a professional stunt-rider was riding the horse.

Other animal action consists of horse and carriages seen in the background, a woman exiting a train with a dog in her arms and several other scenes of the woman carrying the dog from A to B.

All of the animals in this film were provided from Russia. Professional stunt-riders were used for many of the scenes involving horses.