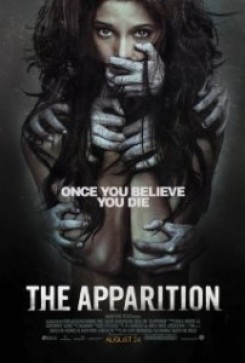 A happy couple are haunted by a presence unleashed during a science experiment.

Want some thrills and chills… and dogs? Then The Apparition is the movie for you! Don’t worry! No dogs were haunted by supernatural beings during the making of this film.

In the scene where a small dog stands in the lawn as a man and child wash an ATV and a car drives up the driveway and stops, trainers were off-camera cuing dog to remain still with hand gestures. When the dog crosses to the actor and actor picks him up, dog was acclimated with the actor before shooting, so he felt comfortable with action.

In a similar scene, a car drives up, a woman gets out holding a dog and hands the dog to her friend’s daughter. The little girl subsequently sits the dog down, which has a leash on and the little girl walks the dog off camera with the lease. Before scene was filmed, trainers demonstrated to the woman and the little girl how to hold the dog. When the car drove up with the dog sitting in the passenger’s seat, trainers secured the dog with a seatbelt.

In the pet clinic scene, animals are seen in crates and being walked on leashes. Between takes trainers took animals out of crates and provided food and water.