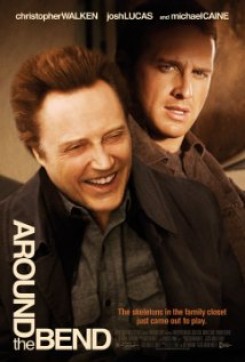 Around the Bend is inspired by the relationship between writer-director Jordan Roberts and the absentee father he barely knew. It tells the story of four generations of men suddenly brought together by the chance to uncover the truth about their family's past.

The part of "Sky" is played by an 11-year-old English Bulldog named Harvey. To get Sky to lie in bed next to Cain, the trainer put Harvey on his mark and stood off camera visually cuing the dog to stay.

During one scene, Sky lies on a bench swaddled with a blanket. Jason (Lucas) gently shakes the bulldog to wake him; however, it is supposed to appear as though the dog is dead. Harvey was cued to "play dead" by an off-screen trainer, and even the actor's touch didn't make the dog move. Other non-actor dogs and their guardians can be seen walking or playing in the park in the background.

In one scene, a man yells at his dog Silver while it cowers under a parked pickup truck. The dog is tied with a long leash, which the man yanks to remove Silver from under the vehicle. After rescuing the animal from its abusive guardian, Turner (Walken) walks up with Silver and puts him in his van.

The part of Silver is played by a two-year-old Border Collie named Vinny. A trainer put Vinny on mark under the truck and stood just off camera verbally cuing the dog to cower and resist when the leash was tugged. Although it looked like the guardian carelessly pulled the dog, it was actually a well-controlled and rehearsed movement.

A later scene shows Silver walking on leash with Turner and jumping into a truck that pulls over to give them a ride. The trainer handed Walken the leash and Vinny trotted next to him before entering the truck to reunite with a hidden trainer waiting inside with treats.