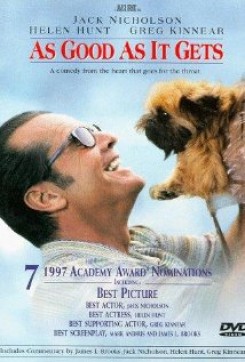 As Good As It Gets

As Good As It Gets is a film about Melvin, a romance novelist with compulsive, obsessive syndrome and, how a neighbor's dog and a waitress change his life forever.

Six dogs portrayed the life of the dog, Verdel. Each dog possessed a special talent, look, or personality trait. There are many scenes where the dog walks from A to B, sits on a bed, is walked on a leash, is picked up and carried by an actor, licks an actor's face, jumps up onto a coffee table, walks to a door and scratches it, etc. The trainer placed the dog on its mark and cued it with verbal commands and a food reward.

At the beginning of the film, Melvin attempts to coax the dog into the elevator. As Melvin lunges for Verdel, the dog lifts his leg and sprays urine onto the wall. Verdel starts to bark, growl, and snap at Melvin and, so to quiet him, he grabs the dog's snout with his hand. Melvin opens the door to the garbage shoot and places the dog inside. Verdel is heard whining as he descends through the chute. This scene was shot in cuts. The chute was approximately 4 ft in length with pads strategically placed along the sides. All of the sides were taped to insure that the dogs did not encounter any ruff edges along the way. When the dog is placed in the chute, the trainer, inside the chute, took the dog from the actor. The dog was released and slid approximately 4 ft. to a second trainer waiting at the other end. The actor was rigged to a device that when pressed by his middle finger, would release water from a tube, which simulated the dog urinating. All of the agitated movement made by the dog was accomplished as the trainer cued it with verbal commands and a food reward. The growling and snapping was inserted during post-production.

There is a scene where Melvin is walking the dog down the sidewalk and the dog is jumping over the cracks. This scene was shot in cuts. The trainer placed the dog with the actor. A green colored, non toxic substance was placed on the cracks and the dog was pre-conditioned to jump over the green substance.

In another scene, Simon, (Verdel's owner) is beaten up by a male model and his friends, who attempt to rob him. To reach Simon, Verdel runs through the debris lying on the floor. In an effort to comfort his owner, Verdel licks Simon's face. The trainer placed the dog on its mark and cued it with verbal commands to "go" and to "lick". The debris on the floor was non-toxic objects strategically placed on the floor.

Other animal action consists on dogs in a veterinarian's office, some being walked on leashes on the sidewalk etc.