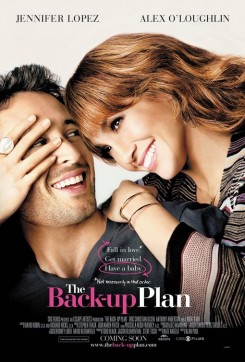 Back Up Plan, The

When a woman decides she is tired of waiting around for Mister Right, she gets pregnant via insemination — the same day she meets her dream man. Now she must learn to trust that he will stick around while seeing her at her pregnant worst.

In a few scenes, dogs are seen in the background near a park. Some of these dogs were coincidentally caught on camera playing with their owners and some were brought to the set by a trainer. The trainer gave the actors the dogs' leashes right before filming began. All grounds were inspected for hazards and the set was closed and secured. Cast and crew members were introduced to the animals and instructed on their proper handling before filming. All food eaten by dogs on the production was deemed safe for animal consumption.

For the scene with the pregnancy test, the test was a rubber prop, which the actress and dog comfortably played "tug of war" with. It was replaced by a pre-broken stick toy for the end of the scene. The pile of vomit shown with the test results was an edible concoction, and the dog's retching was a sound effect added in post-production.

In the film, Zoe (Jennifer Lopez) has a handicapped dog named Nuts, who is equipped with a wheel-rig that holds his back legs. He is seen in the film performing such mild action as being held and walking from one point to another or down a ramp. The dog was well-rehearsed for this mild action, which was cued by trainers.

For the scene in which he walks over a pile of magazines and falls down, the magazines were secured to the floor so as not to cause the dog the slip. Crew members pulled on a string attached to one wheel of the dog's rig, causing the wheel to rise up. Then the dog was placed on the ground in a "down and stay" position and the rig was placed over him. Editing made it appear as if the dog fell down.

For scenes in which the dog rides in the car, trainers placed him on the car seat and attached his collar to a harnessed seat belt. The trainer hid in the car, which was driven slowly a short distance. For the scene in which the car crashes into a tree, the dog was not inside.

In a scene in which Cesar Millan gives a lecture, actors held dogs while trainers stood nearby. The dogs were all familiar with each other and accustomed to the mild action. All background animals in the pet store were rehearsed to be in their respective cages, which were inspected and made comfortable ahead of time. The dog briefly being groomed was merely brushed by a well-rehearsed actress, while on a leash.

Goats were placed in a field with several wranglers, who stood off-camera and shook feed buckets to get the goats to walk in certain directions. The goats were all familiar with each other.

Horses in the background of some shots were allowed to do whatever came naturally while a man drove a tractor a safe distance away. The horses were contained in a corral the entire time.

For a shot in which two pigeons are seen on a railing, the pigeons had monofilament lines attached to their legs. The lines were held by off-camera trainers for this brief scene.