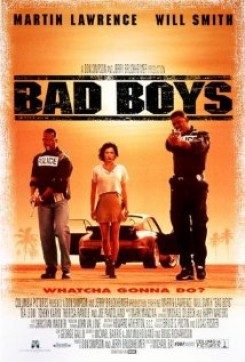 In this action/comedy Mike Lowery and Marcus Burnett are the Bad Boys in this film sporting the same name. These two long time friends are Miami cops in a special narcotics unit. Marcus is married and neurotic, and Mike is the single, ever-so-smooth one.

When one hundred million dollars worth of heroin winds up missing from the station's narcotics lock-up, this pair leap into action, with only 72 hours to solve the case before the Feds step in and take over. They intend to track down the criminals who are responsible, suspecting a corrupt ex-cop and his associates. As they proceed, Marcus takes Julie, an attractive young woman who witnessed two of the killings, into protective custody. Unfortunately, he is forced to do this under the premise of being Mike, as Julie insists that Mike is the only one she will talk to. Her good friend, who was one of victims said that Mike could be trusted. Through a comedy of errors, extensive action and fast cars, this movie escalates to an astounding climax in which our heroic duo prevail.

Julie has two little dogs, Luke and Duke. In one scene Marcus and Julie are trying to evade two assassins sent to kill them. Julie puts Luke in her purse and Marcus picks up Duke from the couch. They run to the cover of Marcus' car for their getaway, with the murderers hot on their trail. This scene was shot in cuts. The dog who was placed in the purse was replaced with a fake dog when the actress is seen running with the purse. The dogs are also seen in several other scenes, lying on the couch, being held and being petted.

In another scene during a brawl between a crook and a cop, the crook flies backwards, hitting the side of an aquarium, breaking the glass. This causes the water and fish to spill out onto the floor. Foam padding was placed on the floor, out of camera range, to cushion the fish's fall. The scene was accomplished in just one take and the fish were out of the water only a few seconds. When the scene was completed, all of the fish were returned unharmed to the pet shop where they were purchased.