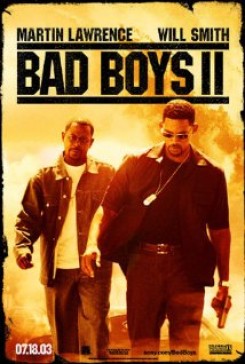 Narcotics cops Mike Lowrey (Will Smith) and Marcus Bennett (Martin Lawrence) head up a task force investigating the flow of ecstasy into Miami. Their search leads to a dangerous drug lord, Johnny Tapia, whose plan to control the city's drug traffic leads to an underground war.

Mason is no stranger to the big screen and that is because his human counterpart is director, Michael Bay. The first time we see Mason on the screen he is sitting on the ground next to the pool that Marcus is floating in. Next we see Mason going into the above ground pool from a deck after a beach ball. The camera cuts to a couple at a table talking and then back to the dog in the pool pawing at the beach ball. Mason has his paws over the side of the pool and looks into the camera for a real cute shot to end this swimming sequence. Mason is very used to the water and so achieving this scene was very easy. The dog was placed on the deck and cued to go into the water by the director throwing the ball into the pool. The shot of the dog pawing at the ball was natural but the final cute shot of Mason looking over the side of the pool was posed. A trainer stood in the pool, out of sight, to help the dog up by the side of the pool as the director stood off camera holding up the beach ball to get Mason to look into the camera. Later we see the dog behind Marcus and Mike as they are talking in the yard near the pool. Marcus throws the beach ball for Mason to fetch, forgetting the dog is attached to a chain, which is attached to the deck of the pool. As the dog runs after the ball, the chain pulls the deck down which pulls the pool down and it begins to empty all over the lawn. This was filmed in two separate shots and edited together in postproduction. A trainer put the dog on its mark with the chain loosely around its neck. The director stood off camera and called to the dog and he happily ran to his side. A crewmember pulled on the chain attached to the deck, from off camera and that made the pool come tumbling down.

Johnny Tapia is the drug lord who Marcus and Mike are trying to take down. In one sequence they pose as exterminators to get into his house. As Johnny brings them to the attic, they wander around and see some rats crawling on the floor, on some pieces of furniture and a mannequin. Johnny shoots one of the rats on the mannequin as they pass by. Three trainers placed ten rats on the floor, furniture and mannequin and allowed them to get used to the marks they were placed on. Once the rats settled into the positions, the camera began to roll and the actors walked through the attic past all the rats. The scene where the rat is shot was filmed separately. A trainer placed two rats on the side of the mannequin and a fake one with a blood squib inside on the shoulder. The gun had a 1/4 load in it so it wouldn't be loud to scare the two real rats.

Later Marcus sees two rats humping like humans would. One is lying on its back while the other is on top of it. He even makes a comment to Mike about how human it is! A trainer took a rat and laid it on its back while another trainer held the other rat in the proper position to make it appear as if they were having sex. Each trainer held a syringe full of food up to the rats and let them eat while in position before the cameras rolled. When the camera began to roll, each trainer took the syringe of food away and stood off camera and the rats remained in that position for a few moments before they lost interest and began to wander away to the trainers standing off camera. After each of theses scenes were filmed and the camera stopped rolling, the actors and crew remained still until the trainers retrieved both of the furry co-stars.

We watch as a man tosses two Iguanas onto the roof of a building. One Iguana crawls by a motion sensor and it goes off, distracting the people inside. Two Iguanas were used in the film. A trainer worked with the actor and showed him how to handle the animals. They were tossed about two feet onto the top of the roof. A trainer stood on a ladder behind the roof and retrieved them afterwards. Iguanas are used to dropping down from trees to the ground, so a gentle toss was nothing to these durable animals. A trainer held an Iguana by its tail and released it on cue and it crawled along the rooftop to another trainer waiting on the other side. Later we watch as an Iguana crawls along the ground and on top of a land mind, which goes off. A trainer set the Iguana on the ground and the cameraman filmed it crawling. A fake Iguana with a blood squib inside was placed on the fake land mind and that is what you see explode on the screen.

In one brief scene as Marcus is at the police captain's house, he looks into a fish bowl, which is suspended from the ceiling. He looks at the fish that is swimming around. An aquarium supply store supplied the fish and bowl for this scene.