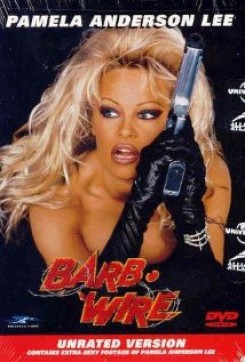 Barb Wire, the film adaptation of the popular comic book, is a futuristic action adventure which takes place in the year 2017 during the Second Civil War. Barb Wire is a young, voluptuous, retired female resistance soldier turned bounty hunter. She is also the owner of the Hammer Head Bar. Barb's services as a bounty hunter go to the highest bidder, no matter who's side of the law they are on. Charlie, her brother, and Camille, her dog, are the only things she cares about. When Charlie is captured and assassinated by the Congressional Army, Barb avenges his death by helping the resistance to stop their latest diabolical plot.

Barb is in the bar area early one morning when a biker enters. She immediately informs him that the Hammer Head is not open for business. The man threatens her, never noticing Camille, Barb's dog, standing at the bottom of the stairway. When he will not leave on his own, Barb commands Camille to do a package check. The dog runs towards the man and grabs the gentleman's crotch with his mouth. On command from Barb, the dog sits still, holding onto the man's crotch. Barb commands him to "take it outside", and the dog starts to back his way out of the bar, still holding onto the crotch. For this scene, the trainer, doubling for the actor, attached a small military style belt to his mid-section, with a piece of leather attached that dangled in front of the crotch area. He then played a familiar game with the dog, that of "grabbing the belt." This made it appear that the dog was biting the crotch area. The trainer then used verbal commands at the same time he tugged on the leather piece, which made the dog pull it in the opposite direction. This in turn made it appear as if the dog was backing out of the building when they were actually playing.

In another scene, the dog is seen standing on the stairs barking at a customer as the man attempts to walk up the stairway to Barbs office. The trainer, just off camera, used verbal commands to cue the dog to bark. In other scenes the dog is seen sitting on Barb's bed, then jumping off and following her as she walks out of the room. In other scenes the dog follows the actor from one room to another. For these the trainer used verbal commands to cue the dog.