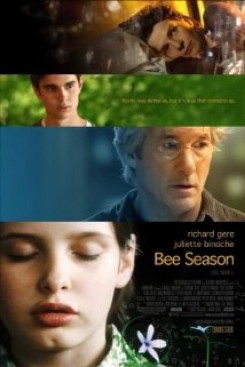 Based on the best selling novel by Myla Goldberg, Bee Season tells the story of Eliza Naumann, an average student blessed with almost supernatural powers of spelling. As the young girl deftly advances through the regional, state and finally national spelling bee finals, Eliza's parents and brother Aaron find their own lives and spiritual beliefs strained by subtle shifts in their interpersonal relationships.

Aaron (Max Minghella) sits on the grass in a park when a dog wanders up to greet him. Owner Chali (Kate Bosworth) catches up to "Tiger" and the dog sits with them while they chat. Later, Chali connects the leash to her collar and they walk away. This canine costar actually belonged to director David Siegel, who cued "Tiger" to perform her simple action.

In one scene, Miriam (Juliette Binoche) peers into the window of a stranger's house and startles when a dog inside jumps up and barks at her. This German shepherd was aggression-trained, which is very similar to the protection phase of Schutzhund training. To elicit this action, one trainer inside the house cued the dog to get aggressive, while an assistant wearing protective padded "bite pants" stood outside the door agitating the dog.

On cue, the inside trainer released the dog, who jumped on the glass door as the actress looked in. When they cut, the handler outside rewarded the dog by opening the door and letting the dog attack his leg. Safety precautions included locking the door during takes and covering the window panels with Plexiglas to prevent any possible breakage when the dog lunged against the door.

During a scene at the hotel in Washington, D.C., Eliza spells the word "origami" and a pigeon outside flutters to the windowsill and converts into a folded paper bird. For the live animal action, the trainer tied a lightweight monofilament line to the bird's leg and then positioned it on a blue screen board. In other takes, the trainer gently tossed the bird into frame and it landed on the board; special effects added later made it appear the bird had alighted on the windowsill.