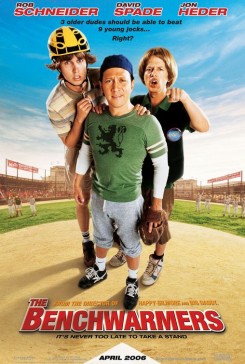 A nerdy three-man team with a love for America's favorite pastime develops a fan following as they take on a series of pint-size baseball bullies and compete for the chance to rule a new, state-of-the-art stadium.

A few shots feature Nelson (Max Prado) with his dog, "Chewy," in the baseball bleachers and at home. In each instance, the trainer placed the mixed-breed terrier with the boy and simply cued the dog to sit and stay throughout the scene, or to walk around naturally.

In one scene, Mel's (Jon Lovitz) robot "Number Seven" rides a lawnmower and accidentally mows over Chewy as he lies down on the grass. In the next shot, the terrier is seen lying beside the mower—hairless across one entire side of his body. The dog then gets up and walks away. Of course, Chewy was not actually mowed; this was a computer-generated imagery (CGI) effect. Trainers positioned the dog on a side-stay between the lawnmower and the robot. On action, the trainer called the dog, and he got up, showing off his new haircut. The hair on the grass was CGI, and the lawnmower was a non-operational prop. A groomer shaved off the other half of Chewy's fur once he finished the movie.

The butterflies and the black beetle seen briefly in the film were purchased by the property master and subsequently released into the wild when shooting was done. When Clark (Jon Heder) catches a baseball that inadvertently smashes the beetle in his mitt, this insect "corpse" was actually made from licorice and a Snickers bar.

The squirrels that fly out of a tree in one scene were a combination of CGI and fake, stuffed squirrels purchased from the company Animal Builders.