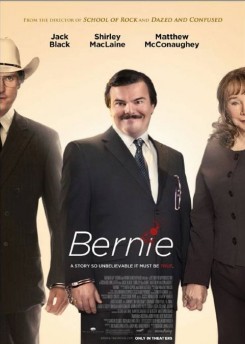 A mortician murders a wealthy widow and fools a town into believing that she’s still alive.

Dove Action:
For the funeral scene where a dove is released into the air, an off-screen trainer placed the bird in the cage moments before filming. The actor then opened the cage and released the bird that flew to its home.

Armadillo Action:
For the scene where Bernie (Jack Black) shoots an armadillo that is crawling through the garden, an off-screen trainer placed the armadillo in front of a garden planter on the grass. Fencing was placed around the area as a precautionary measure for the animal. The trainer baited the planter with worms to get the animal to roam around the grassy area. When Bernie shoots at the animal, the gunshot noises heard were created with the help of squibs which are miniature sound devices used to imitate the sound of a gun. The armadillo never reacted to the squib sounds and continued eating. A trainer retrieved the animal after filming took place.

Horse Action:
The montage scene involving the actors enjoying a hayride with a horse drawn wagon was filmed on location using horses used regularly for hay wagon rides. The horses were led by an experienced driver and trotted for a short distance. They were familiar with each other and accustomed to the pulling action. The wagon was inspected to make sure it ran smoothly and the trail the horses traveled on was cleared of debris and any potential safety hazards.