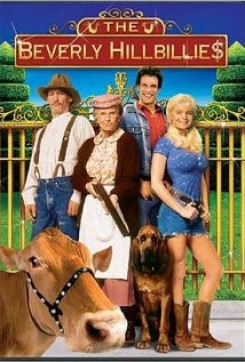 Based on the old TV show, this motion picture version of the Beverly Hillbillies is just as corny as the long-running series. All the beloved Clampett clan characters are resurrected in updated situations. Beginning with a rendition of the "Ballad of Jed Clampett", the story is re-told of how Jed makes a billion dollar oil strike in an Arkansas swamp. Jed decides to move his family to Beverly Hills where his financial affairs are managed by that officious banker, Mr. Drysdale. Jed's romantic affairs are managed by Drysdale's prim secretary, Miss Hathaway, who tries to find a suitable wife for the widowed Jed. Jed becomes the innocent victim in a phony marriage scheme, engineered by an unscrupulous bank employee and his fortune-hunting girlfriend.

There is much animal action in the film, due to the presence of that big-hearted country gal, Ellie May who has a way with all critters, and surrounds herself with a variety of animals much of the time. In an opening scene, Jed's coonhound, Duke, chases a rabbit through the woods. This scene was filmed in cuts with the rabbit running from A to B and into his cage before the dog was released.