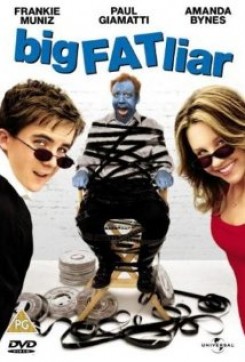 Jason Shepherd's (Frankie Muniz) Jr. High School essay accidentally ends up in the hands of a greedy, popular Hollywood producer, Marty Wolf (Paul Giamatti). When Marty makes it into a hit film, Jason and his friend, Kalee (Amanda Bynes) travel to Hollywood seeking credit and to give Marty his just desserts.

A dog lies under a table and Jason gives the dog his oatmeal. There is also a brief scene of the dog lying by a desk with a ringing phone on it. The dog looks at the phone. A trainer put the dog on its mark for each scene and used hand signals from off-camera to direct the dog's action.

Whitaker, played by Angel, sits next to a cop in a car, dressed in a police uniform clucking as the cop talks to it. The trainer dressed the chicken in the custom-made costume and placed it on the seat of the parked car. The smoke that fills the car was a special effect added in after filming was complete.

At the premiere of Whitaker's movie, a man walks down the red carpet carrying the star clucker. The trainer again put a custom-made costume on the chicken and handed it to the actor. The trainer stood off-camera and retrieved the chicken afterwards.

One of Jason's classmates reveals a ferret inside his jacket. The friendly ferret was introduced to the actor before filming began. The trainer placed the animal inside the actor's jacket and stood nearby to supervise. The trainer retrieved the ferret when the scene was finished.

Animals on the Universal Lot

A camel, giraffe, and an elephant stand in the background on the Universal Studios lot as Marty and some men walk and converse. The camel gets a close-up while a trainer feeds Leonard, the giraffe, a carrot, his favorite food. The elephant, whose real name is Tai, stands in the background. In a later scene on the lot, horses stand tied to hitching posts or hooked up to a stagecoach in the background. The trainers doubled as actors for these scenes. The animals were placed on their marks and just acted naturally as the scenes were being filmed.

A note on the giraffe: The scene was originally going to have three men in pink gorilla suits walking past the giraffe in the background but Leonard, the giraffe, did not like the pink suits at all and acted nervous around them. Production moved the gorilla-suited extras to the other side so Leonard wouldn't see them.

An iguana sits on the side of the road as a car passes. A trainer secured the lizard with a tie-down, so it would not escape. The car that passes was driven in the far lane of the road, as far away as possible from the lizard. The trainer stood just off-camera and the iguana seemed totally at ease.

In another scene, pigeons fly out from the doorway as Marty and Jason run to the roof of a building. Trainers released homing pigeons off-screen from the top of the staircase. All of the pigeons returned safely.