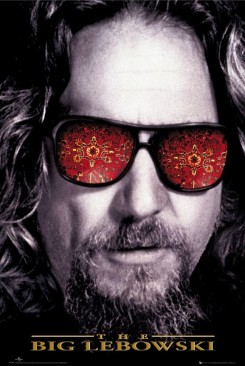 The Big Lebowski is a film about "Dude" Lebowski, a stoned deadbeat who, through mistaken identity, gets caught up in a bogus kidnapping.

A dog is in several scenes with "Dude". The dog is carried from A to B in a doggy carrier, walks A to B in a bowling alley and in the parking lot, rides in a Van, licks a man's face, and jumps up to a man when he pulls out a gun. The dog was placed on his mark by the trainer and cued with verbal and hand commands. There is a scene where a ferret is dropped into the tub while "Dude" is taking a bath. This scene was shot in cuts. For the establishing shot of the ferret in the water, the actor dropped the animal approximately 2ft. into the water and then immediately picked it up and handed it to the trainer who, placed it on the floor. A fake ferret was used for the shots of the ferret thrashing around in the water.