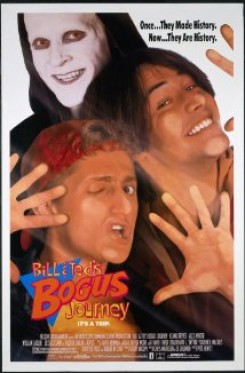 In this sequel to the original comedy-fantasy, Bill and Ted must save the earth from being taken over by the evil DeNomoles. DeNomoles has created two adromitans to look exactly like Bill and Ted. The evil Bill and Ted kill the real Bill and Ted, who must now deal with the devil in order to return to life. In the meantime, the evil pair kidnap Bill and Ted's girlfriends. They are planning to announce the take over by DeNomoles at the rock concert where the evil duo will audition at, and where they plan to kill the girls. Bill and Ted must now save their lives.

As the evil Bill and Ted are arriving to Earth in a phone booth, out of their sheer evilness, they seek to destroy anything in their paths. For instance, as they are attempting to land they see a cat standing in the street. They aim the phone booth to land on the cat. The cat sees them approaching and runs away. For this scene, the cat was just placed in position and then called off stage by the trainer. In another scene the evil couple are driving through town and try to run over another cat. In reality, the car and the cat were filmed at separate times. When the evil Bill and Ted are ransacking the real pairs apartment they take the goldfish and dump them into a pot of boiling water. This scene was shot in cuts. The real fish are seen in the bowl when picked up. When they are put into the pot, fake fish were used. While Bill and Ted are conversing with the Devil, he turns and pulls a dead rat out of his mouth. This was a fake rat.