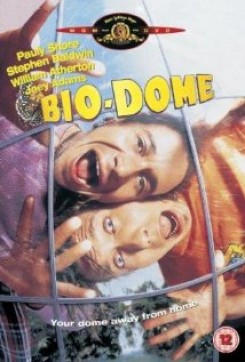 Bio-Dome is a film about two college aged degenerates, Bud and Dole. Bud and Dole's refusal to go to an Earth Day Rally angers their girlfriends, and the girls leave Bud's house mad. Realizing that they have really messed things up this time, the two go after the girls. On the way, nature calls and they stop at what they believe to be a new shopping mall. Instead the two have entered the Bio-Dome, a facility built by a group of select scientists with animal and plant life from the finest specimens, including every kind of terrain and climate known to earth. It is also stocked with enough food for five people to survive on for one year. Unbeknownst to the group of scientists, Bud and Dole did not make it out before the doors were sealed. What was suppose to be a quiet controlled experiment becomes chaotic as the two unwanted guests turn the facility into their personal playground. When the media finds out, Bud and Dole get so caught up in the excitement, that they find themselves really caring whether or not the experiment works. However, they have messed things up so badly with their total disregard of the operations and rules of the compound, that it will take a miracle to get things back on track. But Bud and Dole are determined to right their wrongs, and although their methods seem somewhat unorthodox to everyone else, the end justifies the means and the two become heroes.

In two different scenes a goat is seen providing a service for Bud and Dole. In the first one the goat is acting as a caddie with golf clubs on his back. In the other scene, he is pulling a small plow as they are planting seeds in the farming area of the compound. To familiarize the animal with the harness, the goat was slowly prepped for two weeks prior to shooting. In both scenes, the farming and caddie devices looked bulky and heavy, but actually were made out of lightweight materials. When the goat is acting as a caddie, he was actually holding small poles made out of a bamboo type substance which were suppose to look like home made clubs. They were in a small basket on each side of the goat. The baskets were secured by a harness made of Velcro which was placed around the goat in the same manner as a horse's harness. The segment of the goat acting as a plow horse was accomplished in the same manner. However, in this case, two poles were attached to the harness making a cross pattern at the back of the animal, supposedly with a pitch ax attached. The goat merely walked from point A to point B dragging the poles behind him. The trainer used verbal commands with food as a reward to cue the goat. In an earlier scene Dole and Bud are riding in a car when a rabbit is seen sitting on the side of the road. Dole lights some firecrackers, throwing them out the window, and one lands in front of the rabbit. The firecracker supposedly goes off and the rabbit is seen exploding. This scene was shot in cuts. Both a real and a fake rabbit were used. It was a fake firecracker that was placed in front of the rabbit with a small fuse being lit. The segment of the rabbit being blown up was accomplished with the fake rabbit. There is one flashback scene where Dole shaves his pet dog. This was accomplished with the actor gently applying a razor without a blade to the dog's jaw area. The dog had been clipped prior to shooting with grooming clippers and the trainer had applied shaving cream to his face. There are several other scenes in the Bio-Dome compound where animals are seen in the background. A parrot is seen several times sitting on the actors shoulder as he walks through the compound. There are two fishing scenes. In one a scientist is seen putting a net into the water and scooping out a fish. In the other scene Dole is seen putting his hand into the water, catching a fish. In both scenes, plastic fish were used to simulate real ones. There were also plastic bugs used for a scene where bugs are stuck to fly paper. A dog is also seen being walked by a guard around the outside of the compound.