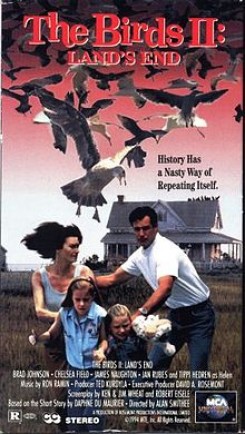 The Birds II: Land's End is a suspense/drama very similar to the original movie by Alfred Hitchcock. A family consisting of Ted, his wife, May, and their two daughters, Jill, 11, and Joanne, age 8, have decided to spend the summer in a tiny seaside village on an island off the mainland. Soon aggressive seagulls and ravens begin to congregate and attack Ted and his family and eventually the townspeople, creating fear, havoc and death. This continues until the birds devastate the islanders and eventually leave to attack the mainland.

Although birds were used throughout, a great many were animatronic birds, prop birds and birds created through optically generated effects. A dog appears throughout both with and without the birds. There are several scenes with simple action for the birds such as perching, flying and pecking. The scenes where the dog barks at birds and runs after them were shot in separate cuts with no danger of scaring the birds. A scene where a hawk dives at the dog and Ted attacks the hawk with a shovel was accomplished using shots of a real hawk edited with shots of a fake hawk and the dog. There is one scene where the dog is under the kitchen table with a starling in his mouth. The girls think it's dead, but Ted takes the bird from the dog, sees that it is still alive and puts it in a box with soft paper. This scene was shot in cuts utilizing a real bird and a fake bird. The bird was not frightened of the dog as the two had been trained together. All of the various attack scenes, although extremely realistic looking, were actually fabricated by cutting between shots of real birds performing simple actions and shots of fake birds, animatronic puppets and optically generated effects. Also, props and special effects such as break-away candy glass, other break-away props and stage blood and make up were used throughout. In several scenes dead birds are shown on screen. In every instance they were fake birds. There is a scene where a dog has died from a fatal bird attack. The dog had been trained to play dead with make up applied to simulate wounds. There are also scenes showing dead fish. These had been purchased from a seafood store. Loose bird feathers used as props were obtained from specialty feather suppliers in Hollywood.