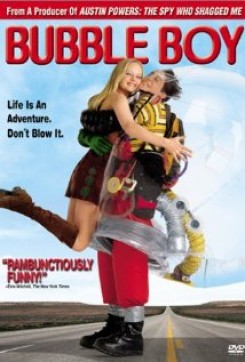 Bubble Boy is a comedy about a young man, Jimmy (Gyllenhaal), who grows up in a completely sterile environment. His mom (Kurtz) smothers him and provides him with her overly protective version of a complete life. As puberty dawns, Jimmy is awakened to the girl next door, Chloe ( Shelton), and sets out on a quest to burst his bubble.

Chloe sees Jimmy staring down at her from his window and she is determined to meet him. Once she does they become flirtatious friends. Chloe presents Jimmy with a gift — a Bubble Guinea — a guinea pig in its own little bubble environment. The trainer prepped the guinea pig in the "critter ball" before filming began and the little bubble guinea was quite comfortable in his playroom. The trainer placed the bubble and animal for each scene and instructed the actors on the proper handling of the bubble so they could interact with it safely.

When Chloe finds herself a boyfriend, Jimmy sinks into a depression believing he has lost his best friend forever. When she decides to marry the boyfriend, Jimmy takes action! He builds himself a travel bubble and runs away into the strange and confusing world to find out if he has any chance at all of stopping the wedding. His quest brings him through the desert, into Las Vegas with a friendly biker, pursued by a cult, captured by a freak show, rescued by a guru ice cream vendor and toppling over Niagra Falls in a bubble. All the while being desperately chased by his parents who are always just a tad too late.

While in the desert, a vulture chases him and finds the bubble an inviting perch. Trainers released the bird and it flew to a spot that had been enhanced with food the bird loved. A second waiting trainer was on hand as the bird set down for the food.

As he and his East Indian guru lumber along in the ice cream truck they pass a field of cows. Distractedly, the guru hits a cow in the road and is convinced he will suffer for eternity since the cow is the sacred animal of the god Shiva. The journey comes to a halt as the guru places flowers around the carcass of the cow and proceeds to pray in the middle of the road. Throughout the rest of the film, the running joke becomes the continued desecration of the sacred cow as busses and biker gangs proceed to run over the dead animal. For this scene a prop animal replica was created along with various interchangeable parts to show the progressive damage to the carcass. This replica also included fake blood and viscera.

Adding insult to injury, a pack of wild dogs sets upon the dead and flattened cow and proceeds to eat the entrails. For this scene a variety of dogs, all resembling Staffordshire Terriers were used. Included in the gang were a Stafforshire Terrier, A Pit Bull/Greyhound mix, an American Bulldog and another Pit Bull mix. The dogs were made to look more wild and streetwise with a non-toxic makeup that added a dirty effect to their coats. Real treats were scattered in the fake carcass to motivate the dogs to root around and appear to be eating the cow. Five trainers were on hand to cue the dogs and prevent any real aggression from occurring.