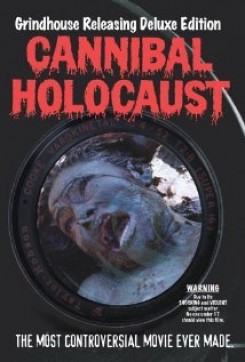 A documentary team of three young men and a young woman head for the South-American jungle to search for real cannibals. After a while, the crew is reported missing and a rescue team is sent from the US to find them.

During the making of this film, an opossum was slit with a knife; the shell was ripped off of a turtle; and a monkey had the top of its head sliced off. Cannibal Holocaust was filmed outside of the US and was only shown in "X" rated theaters during its run. AHA urged moviegoers to protest the film by writing letters to theater managers and by warning others of its inhumane content.