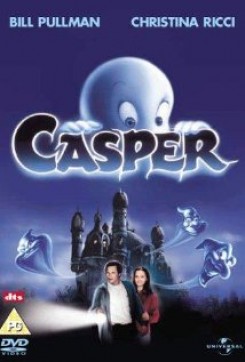 A present day version of the heartwarming Casper The Friendly Ghost, our story takes place in the haunted Whipstaff Manor that Carrigan Crittenden recently inherited from her millionaire father. Rumor has it that not only is the house haunted, but there is also a treasure hidden somewhere. Since the house is all she has inherited, Carrigan is anxious to exorcise the ghosts so she can hunt for the treasure. Enter Dr. James Harvey, a well-known psychiatrist and ghostbuster.

Dr. Harvey moves into the house with his daughter, Kat, who is used to this routine with ghosts and exorcism. She appears to have no fear of ghosts, but because she and her father travel around so much, she would just once like to live somewhere where she could go to school and make some real friends. Meanwhile, Casper and his three zany uncles, also deceased, have been watching them with a great deal of interest. Kat is just the same age as Casper, so he is thrilled to see her and looks forward to actually meeting her. Casper is very shy, however, so it takes awhile for him to get up the courage to introduce himself.

In the meantime, Casper's uncles are primed for their usual hilarious routine to frighten the live humans out of "their" house. They have, however, finally met their match in Dr. Harvey. Although at times the three jolly ghosts can be startling, they are always good for a laugh. When he discovers Kat is sleeping in his room, Casper finally gets up the courage to introduce himself and he and Kat become great friends. In the end, Casper and his uncles come to love these new inhabitants, and want them to stay. The uncles make a deal with Dr. Harvey that if he leaves them alone, they will contact his late wife, Amelia, and ask her to come to him and Kat. Together the uncles frighten Carrigan, her attorney, and the jealous town snob away from the house forever, leaving it to Casper, his uncles, Dr. Harvey and Kat.

The only animal action is that of one seagull flying in the background. American Humane was there when the seagull was filmed. We are rating Casper “Acceptable”.