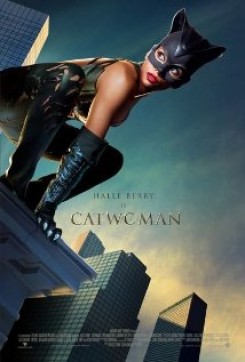 When Patience Philips (Berry) inadvertently stumbles upon the secret behind her employer's newest anti-aging product, she finds herself in the middle of a corporate conspiracy with repercussions that will change the shy, sensitive artist forever. In a mystical twist of fate, she is transformed into a woman with the speed, agility, and ultra-keen senses of a cat. Patience becomes Catwoman, a sleek and stealthy creature balancing on the thin line between good and bad.

Patience Proves Her Worth

A mysterious spotted cat — later named Midnight — repeatedly appears whenever Patience is around. Midnight, played by several rare Egyptian Maus, startles Patience by coming through her apartment window. Moments later, Midnight vanishes and is next seen perched atop the hood molding of a window—prompting Patience to scramble out onto the ledge to rescue it.

Although filmed against a one-story building façade, a blue screen effect added during post-production makes it look like the window looms several stories high. A Genie lift transported both trainer and cat to the hood molding approximately 22 feet above the ground. After situating the cat on mark, the trainer used verbal cues and a favorite squeaky toy to get the Mau to remain in place. Twelve-inch stunt pads cushioned the floor, and furniture blankets covered all railings and were used as safety drops.

For added protection, a furniture blanket was slung across the Genie lift stationed nine feet below the cat, and additional trainers acted as spotters on the ground. According to reports filed by American Humane's Animal Safety Representative, the cat was extremely well prepped for the action. The first assistant director maintained quiet on the set while the cat worked, and production provided a quiet, warm area away from the crew for the cats to rest and play between takes.

In another shot, many cats converge on Patience as she lies motionless on an island of sludge and waste. As the other felines look on, Midnight walks across her chest and lowers his mouth to hers, reviving and converting her into Catwoman.

The resurrection scene was shot indoors with a manmade, rocky marsh set that had small creeks running through it. This was a layered shot, meaning the different cats perform at different times and on different paths, with the final edit appearing as though the action occurs simultaneously.

For the moment of rebirth, a trainer placed Midnight on the actress' chest, and a second handler shined a laser light on Berry's face to hold a 15-second look. A motion-controlled camera moved in so close it actually touched the tops of the cat's ears when it reached its end mark. For this scene, producer played a CD of white noise so that the cats wouldn't spook at the whirling camera sounds.

After the transformation, a disoriented Patience stumbles through a junkyard en route to her apartment. A Rottweiler hunkered on top of a dilapidated sedan sees Patience and chases her across the yard and through the maze of crumpled cars. Before long, two other dogs join the chase and the trio pursues Patience until she manages to leap over a chain link fence to safety. The dogs first slam against the fence ferociously, then they cower when she hisses at them.

Trainers positioned a Rottweiler named Okie in a down-stay on the hood of a car approximately 12 feet above the ground. The dog scaled steps made from junk cars to reach this lofty height, while supervised by an off-camera trainer.

Three dogs ran approximately 30 feet behind the actress so that it appeared as if they were chasing her, and an unseen trainer standing on the other side of the fence cued the dogs to bark "aggressively" at Patience.

As a precaution, Animal Safety Representatives made sure all sharp metal edges the dogs could come in contact with were either removed or treated with spray foam and duct tape. The piles of "junk" on set had painted foam padding on the corners and were secured so they wouldn't topple over. One representative confirmed that, although the junk looks bad, the animals had clear pathways for the sequence and the well-trained dogs performed like champions.

The following day, Patience again discovers Midnight in her apartment and decides to take it to the address she discovers tucked in its collar. At the home of Ophelia Powers, several cats lounge on sofas, chairs, and other horizontal surfaces. A dozen trainers positioned the nine cats on various pieces of furniture and one wrangler shook a pompom high and low to get the kitties to look up and down in specific directions. In a later scene at Ophelia's house, Patience falls from the library balcony and lands on all fours. This shot was filmed before the cats were brought to set.

When Patience and Sally cross paths with two dogs on leash, she hisses at them and they immediately hush. This scene involved a mixed breed Lab and a Shepard-Collie mix walking 15 feet to another mark. Partway through, off-camera trainers cued the dogs to bark, and Halle's hiss did not faze the hounds in the least. On cut, extras handed the dogs back to their trainers, who were also in wardrobe so they could appear in the shot if necessary.

In another scene, Midnight squeezes through the bars to visit Patience in jail. The cat walked through window bars made of painted wood dowels spaced three inches apart specifically to accommodate the animal actor's body size. Once through, the cat leapt to a six-foot plank below the window and then to a padded bench. The actress was also prepped on how to properly scoop up the cat.

Later, Midnight walks on a ledge after Catwoman. Two trainers prepped the cat to walk roughly 20 feet on an architectural molding around the side of a building. It appears that the cat teetered high above the ground, but this shot was actually filmed on a set structure of 12 feet. For safety, the production laid down eight-inch stunt pads, and the head trainer spotted the cat from the ground.