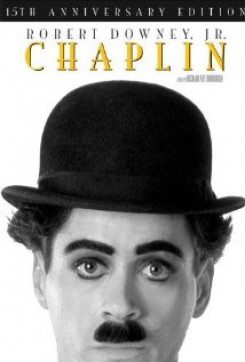 Charlie is based on the bittersweet memoirs of the legendary Charlie Chaplin. Born into a poor vaudeville family, the "Little Tramp" became the world's most beloved film star by the age of thirty. His tumultuous life results in his exile from the United States during the McCarthy era, but a triumphant Sir Charles Spencer Chaplin returns to Hollywood at the age of eighty-three to accept an honorary Oscar. Told in flashback by the elder Charlie recounting episodes of his life to a biographer, the story begins with his first impromptu performance before an audience at the age of five. Charlie, his older brother, Sydney, and his emotionally fragile mother, struggle to earn a living in vaudeville. Charlie is devoted to his mom but her deteriorating mental state forces him to commit her to an asylum. When Sydney returns from the navy, he helps Charlie land his first major vaudeville booking. His brilliant comedic timing, combined with his skills as a dancer and acrobat are an instant hit. Charlie decides to try his luck in America and before long is making "flickers" for Mack Sennet where Charlie creates his famous "Little Tramp" character. Life is very good to Charlie for many years. With his success as an actor and director, he buys his own studio and brings his mother to America where he buys her a lovely home. His closest friends are Hollywood's royalty. His romances and marriages have been less successful and some have been scandalous. However, when he meets Una O'Neill, he knows he has found perfect love at last. An incident with J. Edgar Hoover, makes a lifelong enemy for Charlie. Hoover is largely responsible for Charlie's exile from the United States during the politically sensitive 1950's. Charlie has a most satisfying last word however, during his emotion-charged return to Hollywood in 1972, when he accepts an honorary Oscar.

A wide variety of animals are seen in Charlie. However, in all cases the animals are background or atmosphere. Numerous scenes take place in the late nineteenth century or early twentieth century. Horses are seen pulling wagons or carriages and being ridden. When Charlie first arrives on the set of one of Mack Sennett's flickers he walks into the middle of the filming of a Western. Besides horses, cattle are seen in the corral, mules are tied to hitching posts, dogs are in wagons, and chickens wander around. Trainers were dressed to work as extras in these scenes. In addition, two seals were in a scene taking place backstage in a vaudeville theater. Dogs, a cat and seagulls are seen briefly as atmosphere. During one of the low points of Charlie's life, he receives an envelope and when he opens it, it contains a dead rat. A fake rat was rented from a prop house for use in this scene. A bear can be seen briefly in a vintage silent film that is shown as a part of the story.