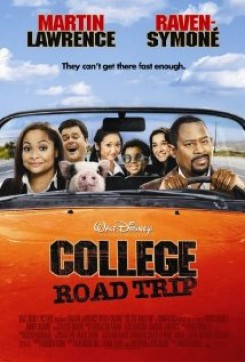 When overprotective father James (Martin Lawrence) learns that his daughter (Raven-Symoné) is interested in attending college halfway across the country, he decides to take her on a road trip to visit the campus, with the ulterior motive of convincing her to attend college closer to home.

James' (Lawrence) son, Trey, has a pet pig named Albert. Actors and crew members were introduced to the pig and instructed on its proper handling before filming began. The pig's harness and costumes were custom-made and comfortable. Any time the pig performs mild action, such as walking, sitting or standing, trainers placed the pig on his mark and cued him using verbal commands and treats. Any time the pig is performing mild action with actors, such as being walked on a leash or being swaddled in a blanket and held, trainers handed the pig to the actors moments before filming began and instructed them on their actions.

Any time Albert is seen turning in a circle, trainers verbally cued the well-trained pig to "get around" and used treats to guide him in a circle. Whenever the pig is on or near the street or the woods, the area was inspected for debris, closed off to traffic and surrounded by trainers. When Albert rides on the floor on the car, the car was not moving and the windows remained open for ventilation. For the shot in which Albert kneels on a sidewalk as if he were begging, a carpet was placed under the pig and trainers cued him to "lie down." He was trained to kneel this way. When Albert's head pokes into the garbage can, trainers placed kibble in the can, which was large enough for the pig to comfortably move and breathe in. When Albert dances on Trey's lap on the tour bus, a costumed trainer sat next to the child actor and supported the pig with both hands. This trainer then extended the pig's legs and moved the pig's head, legs and torso into the aisle, making it appear as if the pig was poking out in a flying position. The bus was never actually moving.

James discovers his son and Albert hiding in the police box in the back of his SUV. Moments before filming, trainers placed the pig next to the child in the specially-made, blanket-lined metal drawer, which was spacious and remained open during the scene. One trainer stood in front of the drawer and another hid near the rear. Trainers used food and verbal commands to cue the pig to stay and get him to turn around and walk toward the back of the drawer.

Albert sits in an inner tube in the bathtub and plays chess with Trey. For this scene, the tub was filled halfway with water so the child actor could actually get wet, but the pig was placed on a custom-made inner tube on a carpeted wooden base. The inner tube contraption was secured to several stacks of sandbags under the water so that the pig never got wet. Trainers placed treats in front of a chess piece and cued the pig to get the treat, causing the chess piece to fall over.

Albert erratically jumps up and down on the bed. He then flies off the bed and across the room, bouncing off a bellhop and landing in the hallway. Then, after jumping out a window, he lands on a tarp serving as a tent at a wedding reception. The tarp rips, causing him to fall into a punchbowl on the banquet table below. This scene was filmed in separate shots using a combination of live action and computer-generated imagery. At the beginning of the scene, when the pig is seen jumping on the bed, a trainer in a green-screen suit (and therefore not seen on camera) held the pig with both hands and lifted him up and down to create the jumping action. When the pig is seen bouncing off the bellhop and landing on the ground, a trainer gently dropped the pig a few inches from the ground as the bellhop "fell" in a choreographed stunt. In a green-screen shot of the pig jumping through the window, Albert was placed on one platform and cued with a treat bowl to jump down a couple of feet onto a second platform. Both platforms were covered with nonslip safety mats. The pig was then gently dropped less than a foot onto a tent top in front of a green screen. A trainer held Albert's upper body through the tent, allowing the camera to film the pig from the head-on angle. For the rear-end angle, a trainer held him from underneath the green-screen tent top. When he appears to fall into the bowl, a trainer held him just above camera range and gently dropped him a few inches into the bowl filled with only enough nontoxic cellulose and tempera paint to touch his feet. He was then immediately removed from the bowl. After the makeup department "painted" the pig with more of the mixture to make him look messier, trainers cued him with a buzzer to run the length of the table. When the pig is seen leaping through the crowd, a trainer wearing green-screen gloves held the pig and moved him through the air. The pig never walked on the actual mess on the table — he was briefly placed on a mark in a designated floor area cleared of debris as trainers surrounded him to keep him from moving off his mark. All dishes, flower arrangements and other tabletop props were secured to the table, and stunt pads were placed on the floor below. The roasted pig with the apple in its mouth was a ceramic prop pig.

The shot in which Albert hangs from a chandelier and flies off was filmed against a green screen using a special cable device and visual effects that were added in later. Trainers secured the pig to the device with brackets that clipped onto the pig's nylon harness. After much preparation, the pig was gently and briefly swung by this device and was rewarded afterward. This scene was filmed in silence to avoid frightening the animal. Screaming and noises, along with the chandelier, were added in later.

The footage seen on the nature show on television was stock footage.