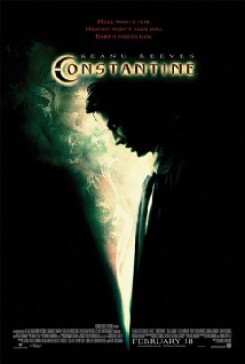 Based on the DC/Vertigo comic book Hellblazer, John Constantine (Reeves) is a globe-traveling misfit who investigates supernatural mysteries. He teams up with a female police detective, Angela (Weisz), who seeks Constantine's help while investigating the suicide-like death of her twin sister.

In the opening shot of the film, a dog walks around in a vacant lot. A trainer put the dog on mark and stood off camera using a combination of verbal cues and hand signals to get the dog to achieve the action.

As Angie wakes up from a nightmare, a cat stands on the bed next to her. Later, the cat appears near her feet in the kitchen as she fills a pot with water. Constantine then picks up the cat from the kitchen table and sits down, holding the cat in his lap. Viewers next see a close-up of the cat's face being held in Constantine's hands as it sits on his lap. Apparently, this is the ritual that brings Constantine to hell. After Constantine returns from his hell trip, Angie opens the door and the cat exits when she enters the room.

A trainer put the cat on mark and used a buzzer to cue the animal to walk throughout the kitchen in the beginning of the scene and to exit through the door at the end. The trainer also showed the actor how to pick up the cat and hold it before filming began. As the cameras rolled, the trainer stood just off-camera to supervise the action.

In a scene in which Constantine stands on a curb in the rain, a big, black crow flies by, a rat scurries nearby, and then a crab crawls near his ankle. These three animals were filmed separately. For safety, production placed cardboard over the storm drain and placed pads on the street in case the crab or rat wandered off the curb. To accomplish this scene, a trainer placed the crab on the ground and let it crawl naturally. The rat was placed on mark and cued with a buzzer to crawl from point A to B. The crow had a long monofilament line tied to one leg for safety so it wouldn't fly away. One trainer then released the bird, which flew to a second handler standing off-camera calling to it. Production used a rain machine to create the weather effects.

In one scene, a big spider crawls on the kitchen counter, and Constantine traps it with a glass. He then blows cigarette smoke into the glass, filling it completely. Later, Angie lifts up the glass and the spider crawls away. This action was done in separate shots and edited together in post production. A real spider did the crawling on the counter. The trainer gently placed the glass over this spider but quickly removed the arachnid and replaced it with a prop spider during the smoky effect.

The cows that appear in one scene and the insects shown in two different scenes were computer-generated images (CGI).