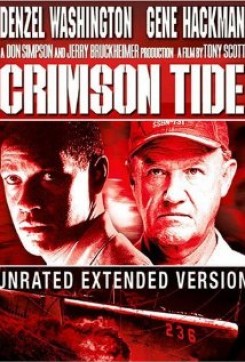 Crimson Tide is the story of a Russian revolt against America. It seems that Russia's leader is declaring war on the U.S. after a series of escalating events, and will stop at nothing to win, including nuclear war. This action sets the U.S. Alabama, an American submarine, into action to try and stop this potentially tragic event from happening. Captain Ramsey, the commander of the Alabama is in need of an Executive Officer and recruits Commander Hunter, an officer who is highly respected and qualified. Little does the Captain know that he is soon to be relieved of his duties by Hunter when it comes time to decide on releasing the nuclear bomb. We are held in suspense as we watch and wait to see what will be the fate of our world as we know it.

A Jack Russell Terrier, Bear, is seen throughout the film, as he is Captain Ramsey's pet and his constant companion. In one scene Bear accompanies the Captain on a pep talk to the crew. He is seen walking on his leash with the Captain in the pouring rain. Since the dog enjoyed the rain, he was under no discomfort. In another scene aboard the sub, Bear is seen relieving himself on one of the decks. The dog had been trained to lift his leg on cue. A loosely fitting plastic tube had been placed on the dog's leg which dispensed water, making it appear as though he was relieving himself. In a few other scenes, Bear snarls and barks at Hunter's men as they try to commandeer the ship. To accomplish this, the dog followed hand commands given by his trainer to speak and smile. In another scene, Bear attempts to attack the men by jumping up on them. To accomplish this, doggie treats had been placed in the actors' pockets. Bear had been trained to fetch the treats. Bear is seen throughout the film eating, sleeping, being petted and sitting in the Captain's lap. Other animal action includes a magician holding a dove on his finger. The dove had been placed there by his trainer for this short shot. A dog is also seen being petted by a child at a birthday party, and fish are in an aquarium as atmosphere.